President Yoweri Museveni has attributed the development that Ruhaama constituency in Ntungamo district enjoys today to the change in leadership from the opposition to the First Lady, Janet Museveni who is aligned to the ruling National Resistance Movement (NRM).

Museveni who was speaking at a rally held in Nyakyera sub-county, Ruhaama county on Monday said that Ruhaama lacked development until First Lady, Janet Museveni of the NRM took the Parliamentary seat.

“I congratulate you and thank you for supporting the NRM. To choose an active and constructive leader in politics, means promoting development,” Museveni told the masses who attended the NRM victory celebrations of NRM’s Kahima Moses Mugabe as the area MP in a by-election.

“When Ruhaama County was being led by the opposition, there was no development, not until Maama Janet Museveni came to represent you as an MP that you started receiving government services – electricity, tarmac roads, schools and health facilities,” the President said.

Ruhaama had for many years been led by FDC’s strongman, Augustine Ruzindana until the 2006 elections when Janet Museveni uprooted him from the Parliamentary seat. In the same election, the First Lady beat Ruzindana with a margin of 35,000 votes.

Museveni who doubles as the National Chairman of NRM urged Ugandans who embrace national developmen to always choose leaders that promote infrastructural development.

He used the occasion to make an appeal to Ugandans to conserve the environment whose purpose he said is critical for several economic activities such as farming and manufacturing.

At the event, President Museveni was accompanied by his wife and now Minister of Education and Sports, Janet Museveni who is also the Ntungamo district NRM Chairperson.

On her part, the First Lady thanked the electorate and NRM leaders for being open, transparent and for their overwhelming support to the NRM party.

“With the support of the new MP, Kahima Moses, Ruhaama and Ntungamo district will prosper,” she added. 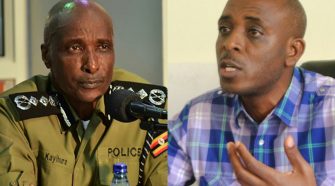