Ssendegeya was Sunday morning shot dead by unknown assailants at around 2am at Nturo village, Chihe parish, Nyakinama sub-county in Kisoro district, while he was entering his house.

Police through Elly Matte, the Kigezi region Police spokesperson, said they arrived at the scene immediately after being notified only to find when the assailant(s) had already taken off and Ssendegeya already lifeless.

Now, Matte has Wednesday told this news website that Police has since arrested suspects who are helping in investigations.

Matte says preliminary investigations indicate that the suspects had a civil suit in court and the deceased was the lawyer for the defendant, a one Migyera in whose favour judgement was read.

“This is said to have annoyed the plaintiffs to the extent that they uttered threatening words against the lawyer,” Matte said.

Others arrested include Hadija Niyijena and Mutesi Eliminate both of Bunagana township and are said to have been in a relationship with the main suspect who is currently on the run.

The Police spokesperson says the duo could be having knowledge of what took place on the fateful day as well as helping in tracing the whereabouts of the main suspect. 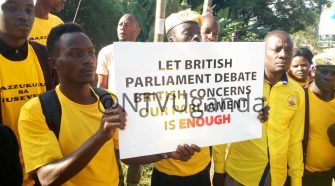