Renowned media personalities Flavia Tumusiime and Andrew Kabuura made a significant step in their journey to being a wedded couple, but singer Alexander Bagonza alias A Pass isn’t impressed one bit.

Over the weekend, social media was flooded with news of NTV Uganda news anchor, Flavia Tumusiime introducing her fiancée, sports journalist, Andrew Kabuura to her parents. A photo of the two love birds whose affair was not known to the public until few months ago, featured on almost every social media timeline in Uganda.

For many years, stunning Flavia’s love life was a mystery to many, which perhaps explains the excitement her official introduction of Andrew sparked.

However, musician A Pass couldn’t hide his lamentation about the development. Little wonder, since in 2016, the ‘Wuuyo’ singer publicly announced that he had a crush on Flavia. But Flavia didn’t seem to care.

On Saturday, A Pass took to his Facebook to express his disappointment in the blossoming affair between his crush and Andrew. He went ahead to reveal that he will be taking time off to go on a mountain and cry for seven days. Heartbreaking!

“The best thing to do now is to move on. What has happened has happened. As painful as it maybe, I have to go forward like Amama Mbabazi,” the singer wrote on his Facebook page.

He said he would take a break from social media and focus on improving himself “and come back stronger”.

His lamentation was so surreal, he stressed it with ‘crying’, ‘good bye’ and ‘heart break’ emojjis.

“At this moment, no one can console me at all, so, I will be going off social media to cry for seven days on a mountain,” the 28-year-old singer whose love life is enigmatic, said.

Under the circumstances, one would say A Pass’ lyrics in ‘Am Loving’, a tale of a girl who is ignorant of the obsession he has for her, have never made more sense. We wait to see if his week-long ‘mourning’ will inspire a new song. 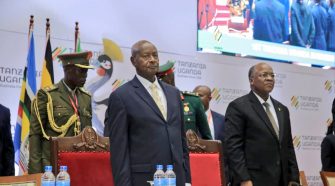