The Chief of Defence Forces, General David Muhoozi has blessed Army plans for resumption of forceful disarmament among the stubborn sections of thieves among the Karamajong communities.

The meeting was chaired by the State Minister for Karamoja Affairs, Moses Kizige and attended by the nine MPs from Karamoja, the Deputy IGP Maj. Gen. Stephen Sabiti Muzeyi, District Chairpersons, RDCs, Police and Prisons commanders at regional and district levels along side other security agents.

The UPDF 3rd Division team was represented by Brig Joseph Balikudembe the Division Second in Command and all his operational commanders.

“Karamoja region is much more endowed than many other regions with opportunities here for the people to exploit and develop. We cannot fold our hands to see the subregion slip into chaos again and our security gains get interrupted”. General Muhoozi said.

The CDF urged both elected and appointed leaders in Karamoja to give people direction.

“Be with them but do not be of them. We have to talk and walk the talk without undermining each other,” he added.

He also called for diversified means of survival for the people of Karamoja starting with education which he said is a game changer.

“The roads have already changed the face of Karamoja. What remains is people to talk to each other, set time lines and standards to follow as we progress “.

The MPs and local leaders in their submissions requested for renewed efforts in forceful disarmament among the stubborn thieves which the Division second in command Brig. Joseph Balikudembe said has never stopped since 2000 when it started.

“In January alone, 33 cattle thieves were put out of action, 09 guns recovered, several criminals arrested and more than 1,000 animals recovered and handed over to owners. In 2019, 69 guns were recovered while 54 guns were recovered in 2018. With the current manpower boost from LDU and fresh UPDF deployments, our work in the war against criminality will even be much easy,” Brig Balikudembe told the meeting.

The meeting was mainly to listen to the leaders in Karamoja on their take in the current peace, security and stability, how they can be restored and maintained for harmonious co-existence of the people with known historical ties.

This comes days after Parliament passed a resolution urging government to take immediate steps to restore peace, security and stability in Karamoja region following the recent armed killings reported in the region.

It followed a motion tabled by Dodoth East Member of Parliament (MP), Samson Lokeris who told the House that despite government disarming Karamojong from 2000 to 2010, some Karamojongs are still in possession of guns which they have now started using to fight with the neighbors on the Kenyan side.

Lokeris said there are rampant raids, killings and abductions along borders and that residents are purchasing guns from South Sudan and Kenya.

The legislator asked that government swings into action to ensure that peace is restored in the region by ensuring that no one is left in possession of arms.

Agago County MP, Edward Otto said that there has been loss of lives and property and many people remain disunited.

“We have talked about this over and over again but nothing is done. Last year, there were promises of compensation but nothing was fulfilled. We need something to be done before people take the law into their hands,” Otto said last week. 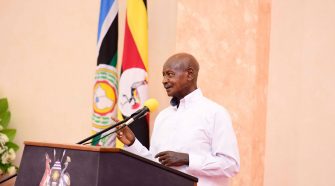