Minister for Finance, Matia Kasaija has thrown his weight behind the directive by the President to prohibit foreign companies from engaging in sports betting business in Uganda, arguing that they repatriate all the profits made from the country which affects the economy.

Kasaija told the press on Tuesday that only Ugandan companies will be allowed to engage in the business. The Minister said that the so-called investors have hurt the economy since the revenue they generate is not invested locally.

“I will soon issue a statement stating that we [government] shall nolonger issue licences to foreign betting companies. Even for the running lincences, they will not be renewed,” Kasaija told reporters in Kampala.

“Yes, they give us some taxes but all the money they earn from sports lovers especially the youth, they move all of it to their countries of origin,” he added.

Kasaija downplayed the categorization of foreign betting companies as “investors” saying that there is no significant investment they bring to Uganda which the local companies can not do.

“I wouldn’t call them investors. What significant investment do they bring? The equipment they use can be bought by Ugandan companies too. This business should be left to Ugandans,” the Minister said.

The issue of restricting betting licences to local businesses emerged a few days ago when State Minister for Planning, David Bahati revealed that President Yoweri Museveni had made the directive.

Bahati was speaking at the closure of the 2019 Brethren Conference of the Diocese of Kigezi.

He said that the directive followed concerns raised especially by religious leaders, that the youths in Uganda continue to waste time and their little income on sports betting and other types of gambling.

“Gambling, sports betting and gambling, there is no renewal of the licences of the companies that are operating. No new companies are going to be licensed, that is what the President has said… The president has directed,” said Bahati.

According to the National Gaming Board (NGB) which regulates lotteries, gaming, betting and casinos, as well as providing licenses for such businesses, 40 companies were licensed to engage in General Betting in Uganda in the year 2018.

Another 12 companies have licences to operate slot machines in Uganda.

Out of the 40 sports betting companies currently operating in the country, 16 are typical online, 14 are land based while 11 are both online and land based.

The law in Uganda (Lotteries and Gaming Act) prohibits persons below the age of 25 to engage in betting or other gaming activities. Section 57 of the same Act incriminates accepting payments or entry into a betting premise for a minor.

Some say the directive by the President is unrealistic since it does not address the issue of online betting companies whose popularity among users has spiked in the recent past.

Even as government moves to enforce strict licencing terms in favor of local operators, some still have concerns regarding the existing laws which give too much time for betting. According to the Lotteries and Gaming Act, operators are allowed to open for business for 18 hours daily (between 10am and 4am).

Anti-betting campaigners say opening these betting palours in working hours has had a negative impact on young people who would otherwise engage in productive activities. 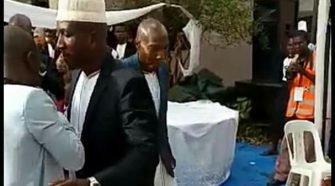