Foreign correspondents in Uganda have decried the attempts by authorities in government to block international journalists from accessing government accreditation which they say curtails press freedoms.

The association that brings together foreign correspondents working in Uganda said that it has increasingly become difficult for reporters working with international news outlets to secure the mandatory accreditation from government.

In a statement released by Foreign Correspondents’ Association of Uganda (FCAU), they say that “since late August, at least 10 journalists wishing to report in Uganda have not been given government accreditation despite fulfilling all of the requirements and following the correct procedure”.

“The process has been quick and straightforward in the past and it is important that this open relationship with Ugandan authorities continues,” the statement added.

Section 29 (1) of the Press and Journalist Act 1995 provides that “no person being an employee of a foreign mass media organisation or working as a freelancer for that mass media shall practice journalism in Uganda unless he or she is in possession of an accreditation card issued by the council”.

The same Act empowers Uganda Media Centre and the Media Council to issue accreditation cards upon payment of fees and upon such terms as may be prescribed by the council.

FCAU says that this frustration of accreditation ties into recent concerns regarding the increasing violation of press rights in the country, characterized by assault of reporters. James Akena, a photojournalist with Reuters was badly beaten by soldiers of UPDF and his camera destroyed during riots that broke out in Kampala weeks ago.

The body notes that “preventing international journalists from working in Uganda adds to a troubling recent pattern of intimidation and violence against journalists”.

“Stopping a number of international media houses from reporting legally inside Uganda is another attempt to gag journalists”.

The concerns comes days after President Yoweri Museveni took a swipe at foreign and local press of persistently reporting negative stories with an aime to make the Ugandan government lose credibility.

He said that the media was mendacious and tendentious in its reporting and that it lacked both discipline and balance.

Museveni said that government was going to deploy technical measures to fight this “sabotage”.

Uganda dropped five places to emerge in 117th position in this year’s World Press Freedom Index which rates the freedoms of journalists in the different countries world over.

The Index compiled by Reporters Without Borders (RSF) in 180 countries reflected on the growing animosity towards the media, openly encouraged by political leaders, and the efforts of authoritarian regimes to export their vision of journalism pose a threat to democracies. 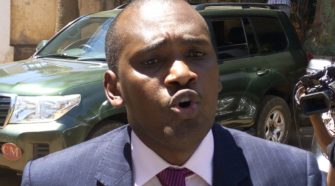