Christopher Aine, a former aide to ex-Prime Minister, Amama Mbabazi, has Wednesday been arrested by police in Kampala while demonstrating in the city centre.

He was part of a protest against bad leadership by the current government which he claims has facilitated gross unemployment and corruption in the country.

Aine together with other two people identified as Byansi Daniel and Sserunjoji Kenny armed with a machete showed up in the afternoon on Kampala road near City Square opposition Mapeera building and blocked traffic while shouting on top of their voices demanding that President Museveni steps aside because he has failed to solve Uganda’s problems.

Referring to themselves as leaders of ‘Rise for Peace’, the duo claimed that stealing taxpayer’s money is on the increase in Uganda but the perpetrators are left scot-free.

“We are really tired, we don’t want to kill people but we are tired completely. The people who are taking Uganda’s money are known and nothing is done about them. Nothing is done about corruption. The only thing they do is parading people,” they are heard saying.

They said they lost parents in the bush war which brought President Museveni in power but the unemployment and embezzlement of government funds by its officials is unbearable.

After moments of commotion, Police officers from the Central Police Station (CPS) in Kampala were deployed to ease the situation and return normal traffic flow and arrested them.

They were thereafter driven to CPS where they are currently detained.

Speaking to SoftPower News on the incident, Kampala Metropolitan police spokesperson, SP Patrick Onyango, said the trio will be charged with attempting to murder a police officer as well as assaulting police officers.

“The information we have got is that they intended to attract attention from some people, for monetary gains. They claim that some people are earning from government yet for them (the detained), they don’t. So, to achieve this they decided to come and assault people and security personnel,” Onyango said.

He explained that people should use proper channels to reach authorities including the President in case they have any issue the want addressed other than acting rowdy.

“We have also now known what you are and we are really to employ all our skills and the law to stop you from breaking the laws of the land,” explained Onyango.

Aine who has been out of the media for sometime now, shot into fame when he disappeared on December 17 2015 following clashes between Amama Mbabazi’s and President Museveni’s supporters in Ntungamo on December 13, 2016, which triggered a police manhunt for him. Aine at the time was a bodyguard to Mbabazi who was contesting for presidency.

Police put out a Shs 20 million reward for whoever provided useful information that would lead to his arrest. Day later, social media reports indicated that he had been killed by security operatives and buried.

Aine would later on April 7 surrender himself to Gen Salim Saleh, five months after his disappearance. He said he had gone into hiding in Tanzania, fearing for his life. 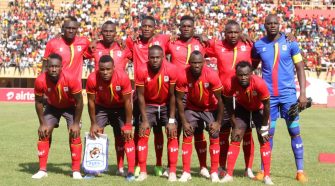 Uganda to Play Ivory Coast and Turkmenistan Before AFCON