The Former Directors and shareholders of the defunct Global Trust Bank Uganda Ltd want the Central Bank to compensate them for the unfair closure of their business.

The demand by the former directors was made Thursday during their interaction with Parliament Committee on Commissions, Statutory Authorities and State Enterprises (COSASE) that is currently probing the closure of the seven defunct banks.

The directors were led by the former Executive Director of GTB, Olusegun Oyeyemi and demanded for over US$ 85 million in damages, interest and goodwill loss over the last four years since closure.

Olusegun told the committee that they were not given an opportunity to understand the status of their business and BOU went ahead to conduct the sale without following the right procedures.

“In 2013 when the end of year account was done, and the shortfall in capital had widened because of the loss, the shareholders brought in addition fund of USD 5.5M to be able to make it the total of USD 10.5 to meet the total of USD 25 Capital requirement,” Olusegun told members.

Last week, it was discovered that Global Trust Bank was closed on 25th July, 2014 and just after a few hours later, it was sold to DFCU with the sole approval of the then Executive Director Bank Supervision, Justine Bagyenda.

Olusegun added that although they have not gone to court because of bilateral relations between Uganda and Nigeria as countries, they have sought for amicable solutions to no avail.

He said that they have tried through repeated letters written to the Central Bank but no response has been given.

The Committee Chairperson, Abdul Katuntu noted that they will be looking into their submissions which will inform some of their contents of the report to the entire House.

The Central Bank revoked the license of operation of Global Trust Bank (Uganda) Limited (GTB) and closed it on July 25, 2014. It followed reports that the bank was continuously accumulating loses and that this would endanger customer deposits.

Bank of Uganda explained at the time that the bank had failed to become commercially viable as it had incurred persistent losses, which accumulated to Shs 60 billion.

BOU also said there had been no improvement in the bank’s financial performance in the five years leading up to the closure, and there was no realistic prospect that it would ever become profitable in the future. GTB had a deposit market share of only 0.5 percent. 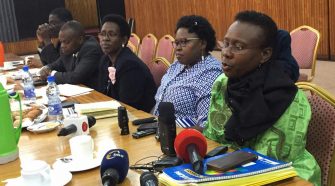