The Prime Minister, Dr. Ruhakana Rugunda on Saturday launched the distribution of food relief to vulnerable Ugandans in the areas of Kampala and Wakiso who have been grossly affected by the lockdown as one of the measures that government put in place in the fight against COVID-19.

According to the Kampala Metropolitan Police Spokesperson, Patrick Onyango, the security team carried out an operation on Saturday, April 4 and four suspects were nabbed at Mackay road, Natete, Kampala.

Onyango said that these were found inciting members of the public who are not eligible to benefit from the food distribution project and confusing the same people that Coronavirus doesn’t exist.

The four include; Chief Moses Mbowa, 42 a resident of Lusaze in Lubaga division, Eric Damba, 20, a resident of Lungujja Kosovo, Decent Segujja , 30 a resident of Buddo and Muhamud Nsanja, 32 of Lungujja Kitonzi and are currently detained at Natete police station, pending the completion of the police investigations, Onyango said.

Onyango added, “We have opened up inquiries against the accused persons for doing a negligent act, likely to cause an infection of disease and inciting violence”.

He noted that when the investigations into the matter are complete, Police shall forward the file to the Resident State Attorney for perusal and advising on the next course of action.

“If it is sanctioned, the suspects will be arraigned in court and charged accordingly. We warn the members of the public to desist from such acts. The police will continue with its operations to weed out such wrong characters in the public during this Coronavirus outbreak. Lets join hands together to fight this pandemic,” Onyango said. 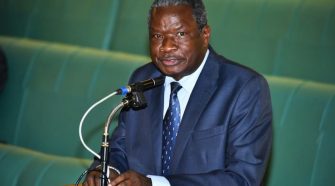