Kitanga parish priest, Fr Gaetano Batanyenda has added to the plethora of condemnation that is being heaped against State Minister for Tourism, Godfrey Kiwanda over comments he made this week when he categorized ‘curvy women’ as tourist attractions.

The Catholic priest from Kabale diocese told reporters in Mbarara on Thursday that Minister is a disciple Satanic.

“I saw Minister Kiwanda with a certain lady on NBS talking about the plans of tying curvy women (who are those fat in size either by choice or otherwise) into tourist attractions,” Fr Gaetano said during a news conference at Grand Holiday Hotel.

“Kiwanda, born of a woman who has a woman and girls to use the curvy women’s diseases to change them into tourist attraction confirms that he is a disciple of Satan,” he added.

The Minister on Tuesday launched a beauty pageant dubbed ‘Miss Curvy Uganda’ which he said seeks to celebrate the curvaceous women in Uganda. He said the pageant also intends to change the perception that beauty is only about the slim women.

Kiwanda added that beyond the wildlife, Ugandan women who are naturally endowed should be used to promote the country’s tourism.

But Fr Gaetano says Uganda has so many physical features, national parks to provide revenue to government rather than displaying women.

“Churchill said that Uganda is a pearl of Africa and as Catholics, we used to sing that Uganda is the Pearl of Africa. So, has Uganda failed to identify anything to show tourists, to an extent of using our wives, our mothers and our girls as tourist attractions?” asked the cleric.

Like many, Fr Fr Gaetano wondered whether government will pay the curvy women and parade them in rooms for tourists to view them.

“Will they construct them a kraal where tourists will always find them? And if tourists find them, will they dance for them? Will they be pictured the way they want? God come and rescue Uganda,” said the priest.

He also wondered whether the Minister would let his wife or daughters to serve such a purpose.

Contrary to the Minister’s opinion on the plus-sized women also known as ‘curvy’, Fr Gaetano says some of these women are suffering from health complications like Obesity, pressure and diabetes.

He fears that the move by Kiwanda is likely to force women in the country to resort to witchcraft and other measures to earn the curvy sizes.

He says if the campaign is not stopped, it will extend into sexuality which contravenes the anti-pornography act.

“Eventually, they will extend to sexuality because tourists will like to sleep with these women, to measure their sizes whether they differ from other women, yet Uganda passed a law against pornography,” explained Gaetano.

He has commended women in different NGOs who have come out to defend the rights of women in the wake of the Minister’s statements.

Gaetano has also encouraged other religious leaders to condemn the Minister’s intentions.

“Every Ugandan most especially my fellow religious leaders, Bishops, Sheikhs, Reverend Fathers and every person that loves Uganda and women should come out to condemn this”.

He also asked Kiwanda’s constituents in Mityana county north to unseat him in 2021 election.

“I think he represents people of God whom I advise to unseat him in the coming elections being a representative of Satan,” the priest said. 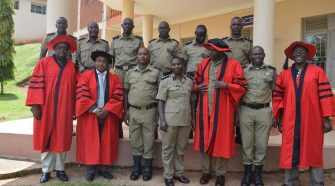