A fuel truck has caught fire and exploded following a motor accident that occurred Friday morning along the Northern Bypass in Naalya, Wakiso district.

The incident occurred at around 11am near Bethany High School  in Namugongo, Divison in Kira municipality.

Police say the accident involved a motor vehicle Reg No UAW 641D, a Fuso that was carrying both petrol and diesel.

The Fuso belonged to Don Uganda LTD and was being driven by one Mpalanyi David, 35, a resident of Nansana.

It was allegedly knocked by an overlapping vehicle, a Legacy Reg No UBD 202B which was being driven by a yet to be identified driver. The driver fled the scene after the incident.

“The rear tyres of the Fuso came off and the Fuso overturned hence catching fire,” Police said in a statement.

Police says nobody was injured. The Police fire brigade visited the scene to put out the fire.

The motor vehicle involved specifically  the legacy has been towed away to Kiira Police station and the Fuso wreckage is still stuck at the scene , efforts to tow it away are still underway. 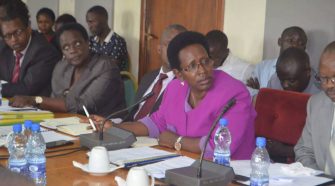