The game ended in a one all draw with Lawrence Mulindwa’s Vipers FC scoring a late goal, neutralising Tonny Odur’s first half goal, but Express players surrounded the referee claiming that the goal was scored from an offside position.

Meanwhile, their fans as well booed the referees demanding that the goal is cancelled.

When the game ended fans attempted to lynch the officials in protest.

It took the intervention the Anti riot Police Police which fired tear gas to restrain order and escorting Vipers players and referees from the stadium.

Today, Edgar Watson, the FUFA Chief Executive Officer, has in a statement announced that FUFA has resolved to ban the trio for sometime from from officiating FUFA organised matches.

“This is to notify you that, upon the advice of the Referees Disciplinary Panel and the FUFA Referees Standing Committee, FUFA has banned three officials of match number 54 of the StarTimes Uganda Premier League played on Wednesday 7th November 2018 at Muteesa II Stadium – Wankulukuku,” he stated.

In the announced decisions, the second assistant referee Kakembo Samuel has been banned from performing refereeing services of all FUFA organised and sanctioned Competitions for a period of 5 years, while Centre Referee Kirangwa Ronald has been given the same punishment but for three years.

The first assistant referee Nantabo Lydia Wanyama has been banned from performing refereeing services of all FUFA organised and sanctioned Competitions for a period of 60 days and the trio has been forwarded to FUFA Committee for Match Integrity for further investigation and decision.

For sometime now, a number of clubs officials have complained of the quality of refereeing in the league which they say is below the standards.

It now remains unclear whether today’s decision by FUFA will prevail on the match officials to restore sanity in the way the manage matches. 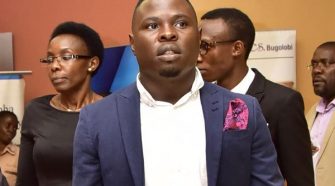