The probe committee instituted to investigate allegations of sexual harassment against Samantha Mwesigye, a Senior State Attorney in the Ministry of Justice, by her supervisor – the Deputy Solicitor General, Christopher Gashirabake – has cleared the latter.

A couple of months back, Samantha came out publicly and accused Gashirabake of harassing her sexually for a period of ten years. She said her efforts to find a remedy were frustrated by individuals and offices where she had reported.

“None of the formal channels or government institutions to which I have lodged informal and formal complaints, with cogent evidence, impregnable documentation and other forms of proof to support my case have demonstrated the will or capacity to investigate, take remedial actions or otherwise provide adequate recourse to my situation,” Samantha said in May.

She as as well accused her supervisor of using Departmental meetings to ridicule and intimidate her.

Now, in its report dated July 31, the committee indicates that it was not convinced that Samantha had no avenues to report the alleged sexual harassment for a period of 10 years as she claims.

It should be noted that the complainant (Samantha) did not appear before the committee.

It relied on her earlier complaint she had filed with the Solicitor General and pieces of evidence she had forwarded to the committee to reach the conclusion.

“It is the observation of the committee that the complainant had all avenues to report sexual harassment but chose not to do so. For example from the year 2007, the office of the Solicitor General has been held by five different solicitor generals, two of whom were female,” reads the report in part.

According to the committee, in 2007, Gashirabake was a Principal State Attorney, and therefore not wielding that much power which Mwesigye alluded to.

In her accusations, Samantha claimed that her boss had instead resorted to victimizing her using a number avenues including recalling her irregularly from Committees and preventing her from leaving the country. But the committee says there is no evidence to the effect.

“Upon careful perusal (of Mwesigye’s complaint), the committee noted that the statement was more of a demand for additional travels than a complaint of sexual harassment. There was no evidence of implied or express promise of preferential treatment or a threat of detrimental treatment,” reads the report.

“There was no evidence that the bulk of nominations signed by the respondent were done in order to procure or after receiving sexual favours,” it adds.

The report further said that an internal probe in the Ministry was carried out to find out if Mwesigye had been deliberately withdrawn from various contract committees as she alleged and that nothing of a kind was found true.

The committee also quashed Samantha’s allegations regarding love messages from her boss. The probe committee says it found “no evidence to prove that the complainant was the intended recipient of the sticker note since it was not directly addressed to her. The committee was, however, unable to determine whether the sticker-note was written by the respondent.”

Meanwhile, the committee in its report accused Samantha of failing to physically appear before it even after being summoned numerous times.

SoftPower News made efforts to reach her lawyers, Chapter 4 Uganda, for a comment but this yielded no success since their official contact was out of reach by press time. 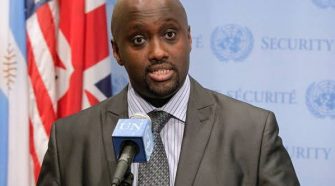