Museveni says the sanctions which include a travel ban (to the U.S.) against Kayihura and his family are of no value since the General is already facing charges in Uganda.

Below is a statement by President Yoweri Museveni published verbatim….

Fellow Ugandans and, especially, the Bazzukulu

It says, in the Church of Uganda Prayer Book, on page 5, as follows: “They left undone what they ought to have done and they did that they ought not to have done and there is no truth in them”. In Runyakore, it says: “Bakareka ebibashemereire kukora, bakora ebibatashemereire kukora, n’amazima tigari muribo”. It is most interesting to see how some of the elements of the Opposition are jubilating about some authorities in the USA who have recently declared that General Kale and some members of his family will not be allowed to enter the USA in case they want to travel there.

Before I comment on the action of the USA Govt in the matter of Kale, I should, first of all, say that, that excitement among some elements of the Opposition shows the poor quality of their spectacles when it comes to issues of Africa and Uganda. Why do they think that going to the USA or, indeed, any non-African country is so important that if you are not allowed there, it will amount to a painful punishment? I know of no Country that is more beautiful than Uganda on Earth Planet. It is actually a sacrifice for me to visit any non-African country on account of bad weather, strange foods etc.

Why do I say this? The first time I visited the USA in October 1987, on the invitation of President Reagan, I was 43 years old and my personal journey had already reached the climax as President of Uganda. In the previous 43 years, I had grown up in Africa, studied in Africa, fought in Africa, failed in Africa and succeeded in Africa. Where in Africa? In: Uganda, Tanzania, Mozambique, Zambia and Kenya.

On two occasions, I also passed through Rwanda and Burundi and visited Mobutu once in Gbadolite. Why did President Reagan invite me? He must have heard that this totally African- made product, known as General of the Resistance, Yoweri Museveni, is of some value. Indeed, we have helped one another with the Western Countries in economy, health (e.g. Aids and Ebola), security etc. In some of the situations, Uganda stood alone or nearly alone. Some examples: the Sudan under Hassan Tourabi when they backed ADF and LRA; Somalia when everybody, including the Americans, feared to go there; the Rwanda crisis; etc. etc. Actually, for most of the 43 years before I visited President Reagan, the Western Countries suspected us as “Marxists”, “Communists” etc. That, however, did not stop us from succeeding in Liberating our Country. Some of the Western and some of the Eastern Countries, not to mention the Arab countries, supported Idi Amin and those Govts. Actually, Idi Amin came to power with the support of the Western Countries. We opposed Idi Amin and their support for him and succeeded with the support of African Countries.

By 1950, China was number 45 in the hierarchy of development in terms of the size of GDP. In the 70 years since that time, China is now the second biggest economy in the World and they are continuing to grow. However, in those 70 years, China has fought with the Western Countries in Korea (1950- 53); they have been on opposite sides in the War in Vietnam (1954- 1975); China backed us in our anti- colonial wars in Africa, while many of the Western Countries were supporting our enemies (in Mozambique, Angola, South Africa, Namibia, Rhodesia, Guinea-Bissau, Mau Mau); etc etc.

Mao Tse Tung never visited any Western Country even once in all his life. I think he visited Moscow two times. Yet, the China he led is now one of the most successful stories of the modern World.

Regarding the Foreign Govts which are fond of using these types of approach, that is their choice. It is really none of our business. It is their country and they are right to run it the way they want.

However, for Kale or other Ugandans who are suspected to have made mistakes, they will always be handled in Uganda. That is why we shall never hand any Ugandan to, for instance, the Court in The Hague- the ICC. Kale is already facing whatever mistakes he is suspected to have committed in our Courts. What value addition is, then, there from external actors? In co-operation in, for instance, Defense matters, some of the Western Countries tried to tell us which soldiers should not be selected for courses in their countries and we rejected that position by stopping all training in those countries. We built the UPDF by our own means from scratch, based on the genuine sentiments of our People as you can see whenever there is a recruitment exercise. Outsiders can contribute in a manner acceptable to us. Otherwise, we are self- sufficient in capacity building as we have always been.

What would be disappointing is to hear that Kale had investments in the USA that his children go to see. That would be treason. Investments in the USA when Uganda needs investments? I do not have and will never have a single investment outside Uganda; possibly, for some sentimental reasons, I could consider investing in Tanzania, Kenya, Rwanda etc. – African countries. However, for non- African Countries: “No”, “Never”. Why? It is the African slave labour during 300 years of slavery, the African resources during the colonial times and the African resources during neo- colonial times that contributed greatly to the prosperity of those countries to the detriment of Africa (How Europe under- developed Africa- Walter Rodney).

It is therefore, inexcusable that at a time when Africa is still struggling to stand up, still with deficits in many areas, that the African elite would transfer money, again, to the West. Culturally, now, the populations in the Western Countries are something akin to relatives: we all speak English or French or whatever; many of us are Christians; we share books written by different Authors; etc etc.

When Africa is strong, she will come to the aid of Europe and the USA. However, that time is not now. On my part, the only time I opened a bank account outside Uganda, was in a Bank in Gothenburg, Sweden, where I deposited the US $ 120,000 that was donated to the NRM by the Late Max Rohrer of Roko. Elizabeth Bagaya also brought US $ 100,000 from Abiola. I do not remember whether I deposited it there also. This was in 1985.

Also Mzee Rusiita from London may have brought some contribution. Otherwise, it is sacrilege for Africans to continue to contribute to the welfare of others to Africa’s detriment.

I am sorry for this diversion. I have not responded to the messages of the Bazzukulu and other Ugandans that they sent in response to my earlier ones, and those wishing me well on my birthday. I will do so soon. Thank you all for wishing me good luck

President of the Republic of Uganda. 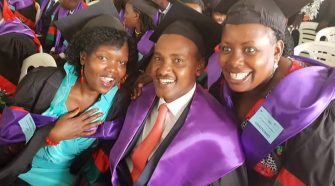