Retired Maj Gen Gregory Mugisha Muntu has sailed through unopposed as the first presidential flagbearer for the Alliance for National Transformation-ANT party.

He was nominated at a function held at the ANT party secretariat along Buganda road in Kampala under the supervision of the party Electoral Commission chairperson, Dan Mugarura.

Speaking to media, Mugarura described the nomination as transparent noting that other would be contenders felt that Muntu is better positioned to lead the party in the presidential race.

Muntu had to fulfill a list of requirements before qualifying for the nominations.

These included among others presenting 20 signatures of seconders, a bank slip for the nomination fees of Shillings 3M, appointment letters of agents, location of his offices, National identity and introduction letters from his LC I chairperson.

After receiving his nomination certificate from Mugarura, Muntu pledged to avoid seeking self-advancement other than that of the country, adding that he is focused on using ANT to build lasting institutions that will outlive its founders.

Muntu also disclosed that ANT will try as much as possible to talk to all elections stakeholders to drop the idea of digital campaigns.

He however noted that they join the race amidst all hurdles should they fail to convince especially the electoral commission to reverse the decision.

He appealed to Ugandans especially young people to leave towns and urban areas and offer leadership to their people at village level.

Mugarura said their next step will be to consult Electoral commission on how their candidate can commence nationwide campaigns.

He said they want to propose townhall meetings which can accommodate few people or outside campaigns guided by health officials.

ANT’s deputy head of coordination and mobilization Prof. Nyanja Musoke vowed to press on as they match Uganda to glory by focusing on not ruling over young people but preparing and grooming them to run their country in the near future.

The former Forum for Democratic Change-FDC party president parted ways with his former party in 2017 after suffering defeat to Patrick Oboi Amuriat.

Along with other former members of FDC, Muntu embarked on forming and building ANT which they say offers alternative views on how to approach the struggle to oust NRM other than FDC’s defiance strategy. 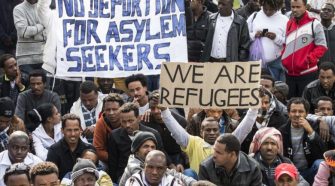