The Minister of Internal Affairs, Gen Jeje Odongo has reportedly asked Police to grant permission for the much anticipated ‘One Million March’ by women in Kampala city protesting the kidnappings and killings of women in Uganda.

Odongo’s appeal follows a letter issued by the Inspector General of Police, Okoth Ochola this week to the Women’s Protest Working Group which is organizing the march, denying them permission to hold the mass peaceful protest. The march is scheduled for tomorrow and will begin at Centenary Park along Jinja Road in Kampala, to the Railway Grounds.

In his June 26 letter, Ochola said the planned demonstration will not proceed, since according to him, all the concerns raised by the Women’s Protest Working Group have been addressed.

He said “the reasons raised for the demonstration have all been adequately addressed publicly”.

Frustrated, the Women’s Protest Working Group, led by Researcher and rights activist, Dr Stella Nyanzi met with the Minister of Internal Affairs on Thursday to express displeasure with the IGP’s move.

It is after this meeting that the Minister wrote to IGP Ochola asking that he reconsiders his earlier decision, according to organizers of the march.

Dr Stella Nyanzi stated in a post on her Facebook that after interaction with the Minister, he overturned the rejection letter by Ochola.

“I thank you, Odong for creating possibilities where others turned them down. I thank you for opening doors that weaker humans had firmly shut down,” Nyanzi wrote.

“Minister of Internal Affairs yesterday evening sent out a letter to Police requesting a revision of their earlier decision. He called on the Police to work together with @WomensProtestUG to ensure security during tomorrow’s march #WomensMarchUG,” the Women’s Protest official Twitter account wrote on Friday.

They further tweeted that; “Our lawyers are currently in a meeting with @PoliceUg and we are awaiting the outcome of this convening – hopefully it will be an outcome that will see the Police come on board for #WomensMarchUG to not only provide security but also march with us”.

They went on to ask that Police provides officers from the force to protect the marchers as well ad traffic police to ensure every road user is safe tomorrow.

Women say security always takes the biggest percentage of Ugandas budget and that ordinary Ugandans must see this budget work for them tomorrow, through protection.

Nyanzi has invited everyone opposed to “the needless kidnaps and murders of women and children in Uganda” to join tomorrow’s march.

On social media, women have been rallying fellow women and other Ugandans to join the cause. They took to numerous platforms using hashtags #WomenLivesMatterUG and #WomensMarchUG to share posters and statistics of the women who have been kidnapped and killed.

It remains to be seen whether Police will indeed cave in and give a green light to tomorrow’s march. 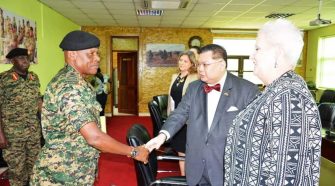