Bush who was the 41st President of the U.S passed on in Houston, Texas on Saturday according to his spokesperson. He died at age 94.

“America has lost a patriot and humble servant in George Herbert Walker Bush,” Obama said in a statement.

He said that “for the more than 70 years, he [Bush] spent in devoted service to the country he loved – from a decorated Naval aviator who nearly gave his life in World War II, to Commander-in-Chief of our Armed Forces, with plenty of posts along the way”.

Obama said that the service George H.W Bush rendered to the U.S both as President, Vice President and other assignments like Ambassador and Director of Central Intelligence was gratifying.

He went ahead to describe Bush’s life as a testament to the notion that public service is a noble, joyous calling.

“He did tremendous good along the journey. Expanding America’s promise to new immigrants and people with disabilities”.

He further commended his Senior for his role in “reducing the scourge of nuclear weapons” and building a broad international coalition to expel a dictator from Kuwait.

It was Bush’s “steady, diplomatic hand”, Obama said, that brought to an end the Cold War without a single shot fired.

“It’s a legacy of service that may never be matched, even though he’d want all of us to try,” Obama said of Bush.

He said that Bush was an example of service to others and commitment to leaving behind something better.

In 2011, while Obama was still President, he awarded George H.W Bush the 2010 Presidential Medal of Freedom, the highest civilian honor in America.

“These outstanding honorees come from a broad range of backgrounds and they’ve excelled in a broad range of fields, but all of them have lived extraordinary lives that have inspired us, enriched our culture, and made our country and our world a better place. I look forward to awarding them this honor,” Obama said at the time.

His first attempt at political office was when he ran for Senator in 1964 but was defeated. Later, he won election to the House of Representatives from Texas’ 7th district in 1966. 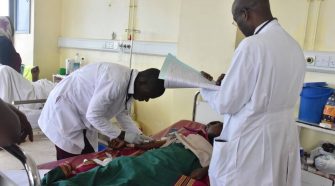