Government has bashed the European Union Parliament for its recent resolutions condemning the alleged torture of Ugandan MPs, partly attributing it (condemnation) to the relations that Uganda is steadily weaving with China.

The Ugandan government in a strong worded statement issued on Monday said the resolution was contrary to diplomatic procedure, unfair and unsubstantiated.

Last week, the European Parliament passed a resolution condemning the arrest of opposition MPs in Uganda and the increasing violations of political rights in the country. MPs Robert Kyagulanyi (Bobi Wine), Kassiano Wadri, Gerald Karuhanga, Francis Zaake and Paul Mwiru were arrested in Arua a month ago and allegedly tortured by security personnel.

It called on the Ugandan government to drop what it said, appear to be trumped up charged against Kyagulanyi and the brutal treatment of opposition politicians and supporters.

The European parliament also demanded for an immediate launch “of an effective, impartial and independent investigation of the killing of Kyagulanyi’s driver Yasin Kawuma and other deaths and the use of excessive force by security agencies.”

Responding to the resolutions, government Spokesperson, Ofwono Opondo said that the actions by the EU Parliament were calculated to undermine the progress made in Uganda and to bolsterUgandan (elected) leaders who want to fuel violence with impunity.

“The people of Uganda would do well with respectful partnerships…, than the current sanctimonious lectures on rights, most of which had been trampled on even when the current defenders were looking on sheepishly or were active participants,” Opondo said.

“This is more so given their greedy search for Africa’s resources for over 100 years,” he added.

He said that it is clear that part of the reasons behind the continued meddling of Western powers in the political affairs of Uganda is due to the blossoming relations with China.

“Does it surprise that when Africa and Uganda in particular is having reinvigorated relations of China, we get bamboozled by western media and governments?”

“We think part of this is related to our emerging relations with China,” he said, justifying the relationship with China as government’s way of diversifying its sources of funding, rather than shifting its allegiance.

He said that it would be double standards for European Union to lecture Uganda on human rights when they have looked on and failed to condemn rights violations and violent protests in the U.S. Opondo added that there has been no significant change in all places where the West has intervened such as Congo, Togo, Libya, Syria and Iran.

“They should not seek to spread the phenomenon of failed states in Africa which we think is their ultimate intention because they want to have their hands on the resources of Africa,” Opondo told reportera at Uganda Media Centre.

The government spokesperson wondered why the E.U Parliament was silent about the violence and indiscipline that the opposition MPs have been exhibiting in recent by-elections.

He said that it was inconceivable that European Union would ask that courts in Uganda drop charges preferred against the accused MPs instead of pushing for a transparent judicial process. This is an attempt to hijack and subvert the institutions in Uganda which are credible enough, he said.

In the previous week, President Yoweri Museveni has on two separate occasions accused foreign powers of meddling in Uganda’s affairs by lending financial support and advice to opposition activities, which he said was morally wrong. It followed claims that Bobi Wine is being propped up by elements in America who want to position him as Museveni’s challenger.

Government reiterated on Monday that it had evidence that rioters who burnt tyres in Kampla days after Bobi Wine’s arrest were bought using money from foreign elements.

Opondo said it was surprising that protests or riots only occured in Kampala and not in the constituencies which the MPs who claim to have been tortured represent – in Kyadondo East, Ntungamo municipality and Arua municipality.

“If there are people who think Uganda is a playground and will be used for mischief, they should better get prepared,” he said. 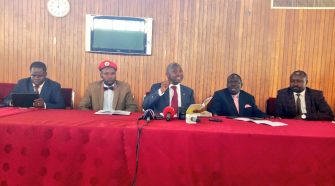