The Minister of Internal Affairs, Gen Jeje Odongo has attributed the latest spate of criminality involving kidnappings and murders, to social media hype and increased drug abuse among the youths.

The Minister made the remarks Thursday in a statement while responding to concerns raised by Mityana Municipality MP, Francis Zaake regarding the current security situation in the country.

Gen. Odongo began by saying that there is no society Uganda inclusive that is totally crime-free, adding however that the duty of government and security agencies is to minimize the occurrence of crime which is precisely being done.

Odongo said that security agencies have tried to understand what drives the new trend and have concluded that the push factors include politics, drug abuse and recidivism.

“The greatest success of the NRM government has been and is, among others, its ability to provide security of person and property to Ugandans. Our population understands and appreciates this. This is why the population has always voted in the NRM so that it can continue to guarantee their security. Many detractors of NRM know this and are now attempting to create the impression that the NRM has failed to provide security,” Odongo said.

Odongo said security has noted that there is a perceptible increase of drug abuse particularly among the youths which abuse unduly influences their behavior patterns.

“Recidivism is a term that refers to a situation where an individual has served his jail term and when released, they again commit a crime and are once again jailed.”

Odongo said that during the same analysis, security agencies also carried out a self-examination and analysis and established that there is a need for self-rectification. 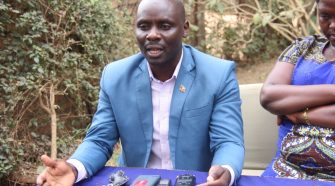