Government together with financial institutions have availed Shs 100 billion that will be accessed by maize traders in order to purchase the excess maize grain at a capped price.

Minister for Finance, Matia Kasaija told journalists on Wednesday that government has put in place a credit facility to a tune of Shs 100 billion for traders as a short term intervention to deal with the falling prices of maize.

Excess production of maize in the first of the two seasons in 2018 in Uganda resulted into price fluctuations. Domestic prices for ungraded maize grain in the first season ranged between Shs 450 to Shs 800 per kilogram in the main urban areas. However, the farm gate price stood at only Shs 300.

The Minister of Trade, Amelia Kyambadde last week attributed the problem of low prices to bumper harvest, undefined prices due to lack of market information, constant decline of demand from traditional consumers, acute lack of standardized storage facilities as some of the drivers of the price slump.

Now, Minister Kasaija has said that government has placed a lower threshold of Shs 500 per kilogram for traders seeking to buy from farmers.

“Government, Bank of Uganda, the Grain Council of Uganda and commercial banks have initiated measures to mop up the excess maize grain using the Agricultural Credit Facility,” Kasaija said.

“Government will avail Shs 100 billion for grain finance through the banking system at a maximum interest rate of 15% per annum to enable purchase of grain by individual traders, cooperative unions and the Uganda Grain council who have the capacity”.

He said that the commercial banks will disburse up to Shs 5 billion to a single eligible trader, in a period of 7 working days upon receiving the loan application. The Minister said that the maximum credit that an individual trader will be able to secure as loan is Shs 20 billion. But for these, he said, processing will be done within 20 working days from the date of application.

“The funds will be accessed by all interested traders in maize business who have requisite storage and have cleaning and drying facilities in order to allow the grain to be stored for 6 months after which the prices are expected to have stabilized,” Minister Kasaija said.

He said that the intervention was meant to encourage farmers who are involved in agriculture, particularly maize production.

Contrary to what Trade Minister Kyambadde said last week, Kasaija clarified that government’s role will not be to directly purchase the grain from farmers but only to avail affordable capital for traders.

“Government cannot go to buy because we don’t have the facilities and we are not good business people. The maize traders have their own systems of how they will collect and pay for the grain,” he said.

Whereas Kasaija admitted that government is setting a price, contrary to the system of free markert economy in which Uganda operates, he stated that the intervention is driven by circumstances.

“The cost of production for maize is about Shs 400 per kilo, so we think the farmer should be allowed to stay with some margin,” he said.

“We must be very careful even when we talk about liberalization. We don’t want farmers to be discouraged and fail to plant the next season. If they don’t plant, we shall starve or we shall have to import maize”. 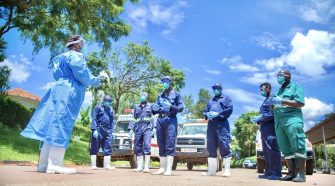