The Ministry of Trade needs USD 126 million to compensate the Ugandan traders who supplied their merchandise to South Sudan and were not paid.

Appearing before the Parliamentary committee on trade and tourism, the State Minister of Trade Michael Werikhe said that government has so far verified 33 legitimate companies and groups of traders who qualify for payment, the though verification process is still ongoing.

The verification process of traders who incurred losses as they traded with South Sudan started way back in 2010. In a meeting the committee held with president Museveni three weeks back, he directed the Ministry of Finance to release USD 42 million dollars to kick start the payments to the traders but this has not been realized as yet.

According to the State Minister for Planning David Bahati, it will require the Parliament of Uganda to first approve the arrangement reached between two states Uganda and South Sudan where Uganda will have to pay off these traders in a lending formality that South Sudan will have to repay this amount on money later on when it politically stabilizes.

“We intend to come to the House because the arrangement we had with the government of South Sudan were that if we can source some funding and pay off Ugandans then we shall pay back within 5 to 10 years when we normalize,” Bahati told members.

The Chairperson of the Committee who is also Fort Portal MP, Alex Ruhunda committed himself to hold meetings with related Ministries to ensure that Ugandans get their compensation within the financial year 2018/2019.

“We have to make sure that we have a tripartite meeting between Parliament, Ministry of Trade and Ministry of Finance so that we agree on the immediate remedy, we should not continue talking the same language in 2018,” Ruhunda said. 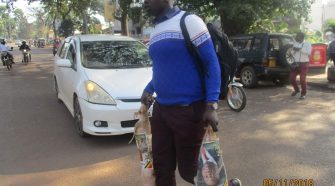