Government through the Ministry of Health and the Buganda kingdom administration have announced plans to sign a Memorandum of Understanding that will see the two entities collaborate in promoting immunization and good hygiene as well as disease prevention.

This was revealed Thursday following a meeting between the Katikkiro (Prime Minister) of Buganda kingdom, Charles Peter Mayiga and the Permanent Secretary in the Ministry of Health, Dr Diana Atwine. The meeting was held at Bulange in Mengo.

The Katikkiro said that the MoU seeks to cement an already existing collaboration between the central government and Buganda kingdom in the health sector.

“The kingdom prioritizes heath because it is key in human development. And we want to render support to government initiatives in the health sector especially in areas where our support can lead to the success of those programs,” Mayiga said.

He outlined immunization, general health campaigns, prevention of HIV as areas where efforts will be more focused.

“We have worked together before with the Ministry of Health but now we want to formalize that arrangement by signing a Memorandum of Understanding and we prioritize areas where we feel the biggest impact will be felt,” added the Katikkiro.

He noted that a healthy population is critical in the development of a country.

He said emphasis will also be placed on personal hygiene and preventable diseases.

“We think this collaboration will go a long way in promoting the health of the people of Buganda and all Ugandans,” he said, adding that the Kingdom will strive to popularize the partnership so that the ordinary person can appreciate its importance.

In her remarks, Dr Diana Atwine said the Ministry of Health identified cultural leaders among the many interventions in the promotion of good health.

“Buganda kingdom has shown interest in working with us. They have been supporting the screening of Sickle Cell. The Kabaka dedicated three of his birthdays to this cause,” Dr Atwine said.

“We think that we can leverage that interest and collaboration to strengthen our public health interventions in the kingdom,” she added.

According to Dr Atwine, immunization, with focus on the central region, will be prominent in this collaboration.

She noted that Buganda is among the regions where there are high levels of cases where children do not complete their immunization dozes. The partnership with Mengo also seeks to intensify sensitization on the importance of pregnant mothers giving birth from heath facilities so as to prevent maternal and infant mortality.

She also said; “We want to look at diseases like Malaria, HIV, TB where we still have high burden. We want them to speak about these at every single time, to take advantage of every avenue that the Kabaka is meeting the population to talk about this”.

The Permanent Secretary noted that the high presence of informal settlements in Kampala and its surrounding districts like Wakiso and Mukono makes the region susceptible to problems relating to poor sanitation and hygiene. 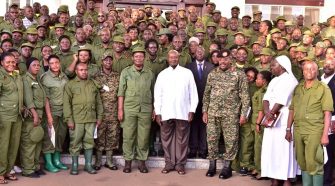