Government has come out to refute reports that were published in the media claiming that Uganda could lose its spot as base for the United Nations a Centre for Peace which coordinates several peacekeeping missions in Africa.

On March 12, the New Vision newspaper carried an article titled “Uganda could lose out on hosting UN center for Peace” which stated that the UN was considering moving the UN Regional Service Center currently situated in Entebbe and relocating it to Kenya. It further pointed to the lack of proactive efforts by government to ensure the Centre is retained in Uganda.

But in a statement released by the Ministry of Foreign Affairs on Thursday, government clarified that there is no such arrangement and that Uganda is actively engaged in bidding to host the UN Centre permanently.

“There has been no decision to move the UN Regional Service Center, Entebbe by the UN General Assembly,” the statement issued by the Permanent Secretary in the Ministry of Foreign Affairs, Ambassador Patrick Mugoya read in part.

In June 2010, Uganda actively engaged with the UN Secretariat and UN member states on a proposal by the UN Secretary General for a Global Field Support Strategy(GFSS) which outlined a new global approach to improving the efficiency and effectiveness of the United Nations, in service delivery to field missions and the better use of resources, as well as the timely start-up and deployment of operations.

A month later, following a spirited campaign by Uganda, the UN General Assembly authorized the UN to start working on a global and regional approach to delivering services, establishing an initial Regional Service Centre in Entebbe (RSCE).

The Centre would provide efficient, scalable and client-oriented services for United Nations field Missions in Africa. Currently, it provides a range of administrative, logistics and information and communications technology services to thirteen client missions in Africa, representing over 73% of all United Nations peacekeeping and special political missions worldwide.

In 2017, government offered to provide 20 acres of land in close proximity to the Center, more than the UN had requested for, to support the RSCE. The land was to enable the UN to expand its operations.

Important to note is that the RSC in Entebbe makes a significant impact on the local economy through employment to 285 local staffers, tax revenue and other services rendered to the 134 international staff who reside in Uganda. The benefits on the business value chain is ernomous.

The New Vision article arises from a decision by the UN General Assembly in 2016 mandating the UN Secretary General to develop a Global Service Delivery Model for the delivery of standardized administrative support services across the UN Secretariat, including Peacekeeping and other field- based entities.

Further assessment would be done on the three locations (Entebbe, Kuwait and Brindisi, Italy) from which shared services are provided for Peacekeeping and Special Political Missions.

“The Report of the Secretary General, on the findings of the working group in its assessment, is expected to be discussed by the Committee on Budgetary and Administrative matters (of which Uganda is member) in May 2018,” government says.

It is after the assessment that the UN General Assembly shall decide upon the location of the Entebbe Regional Service Centre.

“Uganda is not competing and has no intention of competing with our neighbor [Kenya] with whom we enjoy fraternal relations”.

He noted that there is continued interest in Uganda based on the stability and security of the country, its role in regional peace and security, its relationship with international partners and its traditional hospitality. 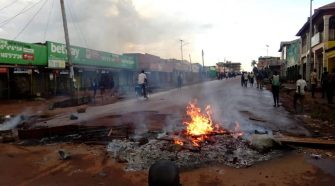