Uganda’s Prime Minister, Dr Ruhakana Rugunda has said that government is considering issuing travel advisory to Ugandans who intend to travel to Rwanda as the diplomatic row between the two countries drags on.

This he noted while responding to concerns that were raised by legislators since Tuesday following the closure of the Rwanda border points by the government of Rwanda.

It is over a week now since the government of Rwanda under the leadership of President, Paul Kagame closed the main border with Uganda at Katuna citing the ongoing construction of the one stop border border post infrastructure as a reason.

Later, Rwandan authorities would issue a travel ban to its citizens warning against crossing to Uganda over allegations that Rwandan nationals in Uganda have been arrested, detained illegally as well as tortured while some have been deported.

The Ugandan government has since denied all these allegations, arguing there are thousands of Rwandans who have lived and continue to live in Uganda peacefully and that Uganda which has been at the fore of championing integration can not be the same witch-hunting nationals of an EAC state.

This diplomatic row prompted Parliament to direct the Prime Minister to furnish the House with an update on how government is handling the impasse between the two neighboring countries.

But while appearing before Parliament on Thursday, the Prime Minister said that government is still engaging in diplomatic talks with its counterparts and will update the House at an appropriate time.

“With view to resolving the current situation, I do propose that government comes back to inform this House with a final solution that the two governments which are in contact with each other have taken to resolve the matter and we are optimistic that the matter will be resolved soon,” Rugunda said.

However, Rugunda’s explanation left legislators unsatisfied prompting further demands that he comes out open on whether Ugandans should continue consider traveling to Rwanda as well as the status of those living in Rwanda.

In response, Rugunda noted that the concerned department of government will advise accordingly.

Rugunda noted that, “As I informed the House earlier, the two governments are in contact and in the view of resolving the impasse”.

“It is true the plan of government is to issue an advisory message to the people of Uganda and efforts are made in that direction,” said the Prime Minister. 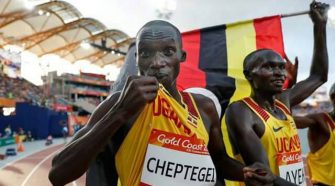