Government has denied knowledge of the whereabouts of New Vision journalist, Charles Etukuri who was reportedly abducted on Tuesday in Kampala.

The Minister of Internal Affairs, Obiga Kania told Parliament on Thursday that security agencies had not arrested Etukuri and neither did they have knowledge of what happened to him.

Obiga said that government was going to investigate circumstances surrounding the journalist’s disappearance and report to the House.

“When the incident happened, we tasked the police to furnish us with information of where he is and by Tuesday, Police had not known up to today,” the Minister told Parliament.

He said that if indeed the journalist is being held by any government department, “we shall produce him before court for whatever wrong he has done and that is the process we have to take”.

Lwemiyaga county MP, Theodore Ssekikubo said that it is so absurd that Internal Security Organization (ISO) is claiming to be investigating Etukuri’s abduction yet reports say the same ISO operatives had been seen abducting him.

He demanded an explanation from government in regard to the double homicides that occurred at Pearl of Africa Hotel and Sheraton Kampala Hotel in which two foreign nationals were killed.

“Can we know from government the fate of people who were killed in our facilities in hotels at the hands of security forces?” Sekikubo asked.

In regard to the deaths, Minister Obiga responded dismissing the claims that government was not doing anything about the incident. He said the investigative bodies have commenced investigations and working towards sending back the bodies of the deceased persons to their countries.

“In such incidents where people of high profile die, government doesn’t just rush to make statements before investigations are done because the public statement may derail the investigations,” the Minister said.

“I will ask for patience, when we reach a certain level of investigations we shall come back and make a statement in the house over the matter”.

According to daily newspaper, New Vision, Charles Etukuri was picked up near the newspaper’s head offices in Industrial area on Tuesday afternoon, around 2:00pm.

“Reports indicate that a vehicle registration number UAH 038A, double cabin, white in colour, had parked near New Vision by 10:00am,” New Vision reported.

The vehicle is said to have been occupied by six people, five of whom were dressed in military uniform except the driver.

“Etukuri was on Tuesday abducted by armed men in military uniform. Etukuri was according to an eye witness, then shoved into a waiting car before the car sped off to an unknown destination,” New Vision wrote in an article on its website.

However, reacting to these claims during Thursday’s plenary, the Minister of Defence and Veteran Affairs, Adolf Mwesige said that a mere semblance of military attire should not be concluded for the army uniform.

While reasons for Etukuri’s disappearance remain unknown, Barbara Kaija, the Editor-in-chief at New Vision said that it could be related to a recent story that he (Etukuri) wrote.

The story reported about the death of a foreign ‘investor’ from Finland named Tuomas Juha Petteri, 42, who died at Pearl of Africa Hotel in Kampala days ago.

According to the story written by Etukuri, Petteri was allegedly killed by security operatives working with Internal Security Organization (ISO).

However, the ISO Chief, Col (Rtd) Frank Bagyenda Kaka denied the allegations in one of Uganda’s dailies, Daily Monitor. “That is trash,” Col Kaka is quoted to have said describing the allegations.

MP Sekikubo insisted that government finds out the journalist’s location or produce him in court in case he committed an offence. 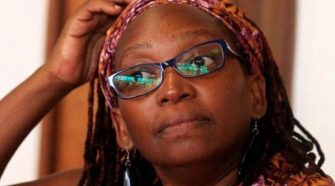