The government of Uganda has expressed concerned that the bulk of the financial pledges made by the international community during the 2017 Refugee Solidarity Summit held in Munyonyo were channeled through international NGOs.

Government said it was “disappointed” that majority of the countries that pledged financial assistance towards Uganda’s response to the influx of refugees instead handed the money to their affiliate NGOs leaving the actual needs uncatered for.

In June of 2017, Uganda hosted a major summit to mobilize resources from the international community, needed for refugee interventions. The summit was attended by among others the UN Secretary General, António Gueterres, different Heads of State, representatives from humanitarian agencies, corporate entities and development partners.

At the day of the summit which was co-hosted by President Yoweri Museveni and the UN Secretary General, over US$ 350m had been pledged, out of the target of US$ 2m needed by Uganda at the time.

Minister for Relief, Disaster Preparedness and Refugees, Hillary Onek while addressing a news conference on Thursday wait that much of the money, instead of being handed to the national treasury, has been given to NGOs involved in refugee related activities in Uganda.

“Unfortunately, we got only US$ 1.5m [from China and India] which was put in the treasury in the Ministry of Finance. The rest of the money, the NGOs lobbied their countries saying they are also helping refugees in Uganda. So, their governments instead of channeling the money to the treasury, gave all the money to the NGOs,” Minister Onek told reporters at Uganda Media Centre.

He said this while jointly, with UNHCR Country Representative in Uganda, Joel Boutroue, releasing an interim report on the biometric verification exercise that sought to establish the actual number of refugees in Uganda.

Uganda currently hosts 1,154,352 refugees as of October 2018, making it the country with the highest number of refugees in Africa.

The Minister explained that health and education facilities meant for Ugandans have been overwhelmed due to increased number of refugees. He said that government intended to use the donations from the 2017 summit to expand the capacity of schools and health centres so as to better the lives of citizens.

However, the said NGOs instead have used the money to fund programs of advocacy on issues of human rights and sexual violence, he revealed, yet they [NGOs] are not accountable to the government which makes it had to recoup the money. He added that the NGOs spent part of the money to acquire new land cruisers yet there are no roads and health facilities in refugee communities.

“It is very pathetic and we are really disappointed. We spent Shs 4bn on that fundraising but we haven’t got any impact from it,” the Minister noted.

Onek said he has since been informed by the countries that made the pledges that the money was sent to their NGOs which operate in Uganda.

“I think we are going to seek accountability from these NGOs. They should have consulted us so we can tell them what we wanted to do with the money. They would then tell us if they were able to do it better than government,” Onek noted.

The US$ 1.5m which Uganda received directly from China and India was used by government to expand education facilities in Bidi Bidi and Lamwor refugee settlements. Government has now resorted to sourcing for loans under the Refugee Window 18 of the World Bank to improve health facilities in refugee hosting communities.

A rather disturbed Onek wondered why Uganda continues to spend heftily on refugees who are not a making of Uganda but rather external politics.

“If that land [given to refugees] was used for maybe farming and other activities, may be we would be getting more out of it. But it is now lying idle because refugees are there. Maybe we need to assess the value of giving out this land and add it to our financial contribution”.

He said that out of the money required to cater for refugee needs, only 42% is provided by the UN while the balance (58%) is being footed by government.

“Refugees are not our problem, they are a result of international politics, so why do we spend 58% on issues that are not ours? International bodies should take care of these problems”.

He corrected the perception that government officials mismanage resources donated by foreign agencies towards refugee programs, saying that Uganda does not receive any direct funds for refugee related activities.

“We don’t receive even one dollar from United Nations for refugees. The operations that are run here, the UNHCR and other agencies are the ones who supply and facilitate the living of these refugees. As government, we only give them land, security and we give them [refugees] health services at the border to avoid transmission of diseases. It is us spending. It’s Ugandan money which is being lost,” Onek clarified.

Explaining the budget for Uganda for the year 2018, the UNHCR Country Rep, Joel Boutroue said that out of the US$ 400m which UNHCR and its over 60 partners in Uganda appealed for, only US$ 180m was released by the donor community towards refugee programs in Uganda for this year.

“Our wish in the years that follow is to increase support to the line Ministries, Ugandan outfits and local governments to enhance the capacity of Uganda to respond to the emergencies that may arise,” Boutroue said. 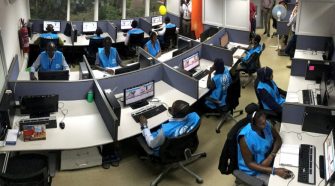