The Prime Minister of Uganda, Dr. Ruhakana Rugunda has said the National Resistance Movement (NRM) Government has so far achieved 79.9% of the Manifesto.

Rugunda while launching accountability activities of the Manifesto at the Office of the Prime Minister in Kampala said the NRM is on track to achieve the overall Implementation of the Manifesto. He said 79.9%  is only a few points to 80%.

“Overall, our assessment of the implementation of the Manifesto commitments to date stands at about 80 percent. As we stand, we are on course to achieve most of the targets we set out in the Manifesto” said Rugunda.

Rugunda added that Government has been following the President’s directives in implementing the Manifesto highlighting the critical priority areas.

“In the implementation of the Manifesto, we are guided by the 23 Directives issued by H.E. President Museveni at the first Cabinet Meeting in June 2016, highlighting the critical priority areas that need to be attended to, in order to achieve our goals,” Rugunda said.

He added that government is using this Manifesto Week (18-25th May 2020) to take stock of what has been achieved so far, the challenges that they have encountered, the steps being undertaken to address those challenges, and the way forward.

He says that for government to ensure smooth implementation of the Manifesto, it initiated a number of reforms with regard to policies, laws and regulations and among these are proposals in the amendment of the Public Procurement and Disposal of Assets (PPDA) Law; free connection to the national grid; improved planning, budgeting, monitoring and reporting; and continuous implementation of affirmative action.

Rugunda cited maintenance of peace and security at both the local and regional levels.

“As you are aware, maintaining peace and security has remained the core ingredient upon which the various social economic activities are hinged, at the regional level, we continue to work with neighbors, the UN, African Union, IGAD and other partners to support efforts aimed at promoting regional peace and security”.

“We completed and commissioned Isimba Dam which has added 183 MW of electricity on the grid. Generation of reliable energy is critical to attracting investments and driving industrialization.”

“We promised the country that we would revive Uganda Airlines during this term of office. I am pleased to note, as you already know, that four aircrafts were received in the country. This will open Uganda to many opportunities, boost tourism, raise our flag and brand our country”.

In the health sector, he noted the completion and commissioning of the Specialized neonatal hospital and rehabilitation of Mulago National Referral Hospital.

“We completed and commissioned the Specialized Women hospital at Mulago, a sign of NRM’s continued commitment to the health of our mothers, daughters and the new born babies. The rehabilitation of Mulago National Referral Hospital is at 95 Percent completion.” He noted.

In the industrialization sector, Rugunda said the government has launched a number of factories that are employing a number of Ugandans.

“On industrialization , you may all be aware that the President has been launching and opening several factories that produce goods ranging from food products to agricultural inputs and other essentials.

Besides producing goods and services, these industries employ many Ugandans, utilize local raw materials and pay taxes into our national treasury” said Rugunda.

Rugunda also noted that the Government has completed construction of the one border stop points in the main exit/entry points to facilitate cross border trade and the completion of the Entebbe-Kampala Expressway Nile Bridge and construction of irrigation schemes to support commercialization of agriculture.

“We have also completed the construction of the one border stop points in the main exit/ entry points to facilitate cross border trade, these have been operationalized”

Rugunda said that the completion of Karuma Dam will be by the end of this year, expansion of Entebbe International Airport will also be complete soon.

“Karuma Dam will be completed by end of the year and this will add an extra 600 MW on the national grid this will bring generation capacity to around 1839 MW. All our District headquarters are now connected to power, save for the newly created districts. In addition, money was mobilized to connect all our sub counties by close of 2020.”

“Work on expansion and modernization of Entebbe International Airport to accommodate the volume of increasing traffic is also nearing completion” Rugunda said.

In the Education Sector, Rugunda said government mobilized money to establish seed secondary school for each sub county commenced with the construction of 129 schools in sub counties where are no secondary schools.

Commenting on the Agricultural sector, he said government has continued to prioritize investments in the sector.

“We have continued to prioritize investments in agriculture as the backbone of our economy with provision of pesticides, seedlings and extension services to farmers. The recruitment of extension workers in particular has provided farmers with the knowledge and skills to handle their activities professionally and with a business mind” Rugunda said.

He added that through OWC, government has distributed seedlings to farmers noting an increase in production.
“Through Operation Wealth Creation, seedlings of cocoa, citrus, tea, mangoes, oranges and apples have been distributed. There has been increased coffee production. For example, coffee production has grown from 4.8 million bags last year to 5.63 million (60 kg) valued at USD 492 million which represented a 40% increase in value from the previous year”.

On the economy, Rugunda said the fundamentals responsible for growth are being dealt with systematically.

“The fundamentals of the economy that are responsible for rapid economic growth are being systematically dealt with. It is not surprising that our GDP growth rate that had declined due to severe drought among other factors has regained pace at 6 percent. We know that Covid-19 will have negative impacts on growth, but we are confident that we will bounce back” Rugunda said.

He added, “On investments, the Government is working to improve the investment climate to reduce the cost of doing business and attract investors.”

However Rugunda noted that there have been some challenges while implementing the Manifesto like delays in acquisition of land, delays in project executions and corruption.

“In implementing the Manifesto, we have faced some challenges, such as delays in acquisition of land for flagship projects across sectors. Compensation remains expensive and sometimes delays project executions.”

He added “there’s corruption, this undermines the different efforts invested to achieve our targets, however Government has strengthened anti-corruption efforts, including by establishing the State House unit led by Lt Col Edith Nakalema to fight corruption.”

“I would like to thank you for the resilience you are showing in the collective fight we are in, to combat the Covid -19 pandemic. The gains we are making are largely due to heeding the guidelines given by Ministry of Health and HE President Museveni. The pandemic has affected and continues to pose serious challenges to lives, livelihood, businesses and our whole way of life. But we are confident that we will defeat it” said Rugunda.

He added “As part of the duty of the NRM Government under the leadership of HE President Museveni, when this pandemic broke out, the President promptly led from the front and made the right decisions at the right time”

, and advised accounting officers at the local government levels to organize to use radios and other media to inform the masses about the implementation of Government programmes in their various districts. 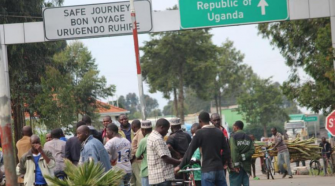 Rwanda Military Shoot at Rwandans Who Were Carrying Bananas From Uganda