Government has extended the deadline for Students’ Loan Scheme applications for the academic year 2017/18.

The Minister of State for Higher Education, John Chrysestom Muyingo, told press in Kampala on Monday that the ministry advertised the call for Students’ Loan Applications in May this year and set a deadline for 4th August 2017.

Speaking on behalf of the Ministry of Education and Sports and the Higher Education Students’ Financing Board, Muyingo said the students’ loan scheme is an important Government social intervention aimed at increasing access to Higher Education among the needy Ugandans.

“This time round, we would like to inform you that the Higher Education Students’ Financing Board is extending the Loan Application Deadline to Friday 18th August, 2017 for Undergraduate programmes and Thursday, 31st August, 2017 for students applying for Loans to pursue Diploma Courses in the Other Tertiary Institutions.”

He noted that this has come as a result of delays associated with students’ admissions procedures in both the Public Universities and the Other Tertiary Institutions, which we promise to improve going forward.

The Student Loan Board relies on admissions from the participating Universities and Other Institutions of Higher Learning to start its selection process.

Any delays on the part of Universities causes delay in processing applications for eligible students and severely affects non-successful students an opportunity to look for alternative sources of funding after failing to secure loans when Universities have already opened, Muyingo explained.

“As it is always the case, we would like to encourage all eligible Ugandans to apply for this Government funding which will enable them to receive Tuition fee, Functional fees, Research fees and Funds for Aids & Appliances for Person with Disabilities.”

He said the Board to-date has awarded loans to a total of 3,799 students to study in 18 Universities both Private and Public and Other Tertiary Institutions and also approved 74 Undergraduate Programmes up from the initial 26 and another 63 Diploma Courses.

The Government under the leadership of H.E the President of the Republic of Uganda promised all Ugandans to introduce a Students’ Loan Scheme to address the problem of inequitable access to Higher Education which is progressively being achieved.

The Students’ Loan Scheme in addition to the many other Government interventions was introduced to increase equitable access to Education to all Ugandans to pursue Higher Education.

The Government plans to increase the funding to ensure that more students in the participating Universities and Other Tertiary Institutions also qualify so as to widen access and give a chance to more needy students to attain Higher Education.

“Education is the most powerful weapon which you can use to change the world (Nelson Mandela), so I encourage every eligible Ugandan to go for it,” he advised.

He added: “And again Education is the passport to the future, for tomorrow belongs to those who prepare for it today. It’s Education that will liberate the poor and enable them break the poverty cycle which engulfs most of our families.”

He encouraged all Students who have been admitted on private arrangement in the areas of Science & Technology for Undergraduate Programmes and Diploma Courses to apply for this Government resource as guided by the Higher Education Students’ Financing Board. 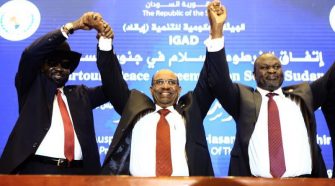