The Ugandan government is set to embark on international promotional road shows in major cities as it seeks potential investors for exploration of the five oil blocks recently announced in the Second Licensing Round.

Uganda’s Second Licensing Round was launched on May 8 this year at the 9th East African Petroleum Conference and Exhibition in Mombasa.

A total of five prolific blocks all located in the Albertine Graben are now available to potential investors.

The Ministry of Energy said in a statement that local and international companies have an opportunity to participate in the Pre-qualification stage either single handedly or through joint ventures.

Applications must be submitted before November 22, 2019. The pre-qualified applicants will then be issued with the bidding documents and also required to identify area (s) of interest.

In line with attracting potential investors, government will hold road shows in major cities – London on October 14, Houston on October 17 and Dubai on October 22 this year.

The Manager, Second Licensing Round and the Acting Commissioner for the Upstream Petroleum Department, Frank Mugisha, says the road shows will be organized by M/s Schlumberger Oil Field Services.

The shows will provide a platform for government officials to deliver presentations and exhibition on the prospectivity of the blocks, legal and regulatory framework, data availability, commercial and fiscal aspects, requirements for the pre-qualification, among others.

According to the Permanent Secretary Ministry of Energy and Mineral Development, Robert Kasande, the Second licensing round comes at a time when the country is progressing into field development and production of the already confirmed oil reserves.

He said the produced oil will be commercialized through the Refinery and East African Crude Oil Pipeline which are both under development.

“Therefore, development and production of any confirmed reserves from the new blocks will find infrastructures and evacuation routes to the markets already in place,” Kasande said.

Government says the second licensing round is driven by factors including the establishment of additional petroleum resources and reserves, the current high price of crude oil, interest in investing in the country’s oil and gas sector, a conducive investment climate and minimal geological and commercial risk.

The increase in the current resource base, government believes, will ensure that the expensive infrastructure, such as the refinery and crude export pipeline, are economically sustained for a reasonably very long time.

Uganda made the first commercial discovery of petroleum in 2006. Based on approximately 1.4 billion barrels of recoverable oil and 500 billion cubic feet of gas resources, the country issued production licenses to licensed companies and is now proceeding to development, production and commercialization of the oil and gas resources.

The confirmation of commercial oil reserves in the country and the PLs are the basis for the planned development, production and commercialization of oil and gas and the ongoing infrastructure developments such as roads, Kabaale International Airport, and industrial parks. 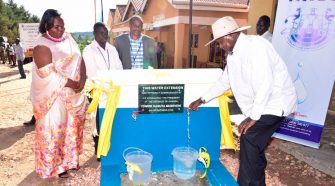