Government has Monday signed the contract for the upgrading of the Rukungiri – Kihihi – Ishasha – Kanungu road after years of stalled progress.

The 75.8 kilometre road will be constructed by M/S China Henan International Corporation Group Company Ltd at a cost of Shs 207 billion. Government acquired a loan financing for the project from the African Development Bank (AfDB).

The signing on Monday between UNRA and the contractor was witnessed by State Minister for Works, Gen Katumba Wamala, the Member of Parliament for Rujumbura county in Rukungiri district, Fred Turyamuhweza and the Kanungu district chairperson, Josephine Kasya.

The earth gravel road which links Rukungiri and Kanungu will be upgraded to bituminous standards.

It follows a competitive bidding process in which 18 firms were prequalified, 11 of which eventually submitted bids.
Civil works on the road will begin within the next 42 days and the construction will take a period of 3 years.

The contract for supervision was awarded to M/S SMEC Limited.

UNRA termed Monday’s contract signing as a landmark event given that this process had been preceded by two other unsuccessful procurements causing concern among political leaders as well as the communities in Kanungu and Rukungiri.

“We wish to thank the local population for their patience and understanding as the procurement process was being undertaken,” UNRA said in a statement.

The Authority also urged the contractor “to ensure the works are executed to the specified quality, are completed in time, and that the environmental and social safeguards embedded in the contract are adhered to”.

Emphasis was also placed on the need to ensure local content, particularly the use of local materials and employment of locals.

Additional benefits will emanate from jobs created during construction, sub-contracts for supply of goods and services and roadside socio-economic activities.

The Minister for Works, Gen Wamala cautioned workers against stealing construction material used for road construction, and the contractors to respect environmental and social issues.

On the same day (Monday), government also signed a contract for the upgrading of Masaka – Bukakata road (41 kms).

The proposed civil works are to be financed through a loan from the Arab Bank for Economic Development in Africa (BADEA) /OPEC Fund for International.

M/S The Arab Contractors (Osman Ahmed Osman & Co) will construct the road at a cost of Shs 195 billion in two years. The contractor will be supervised by M/S Galander Engineering Consultants in association with KKATT Consult. 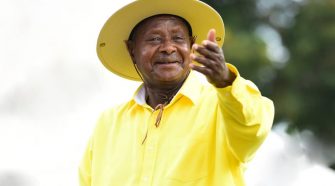