The residents of Gulu have given government an ultimatum of two days to lift the lockdown.

Transporters and travelers were left stranded on Wednesday morning at Gulu main Bus Park after security enforced what was understood as a President’s directive that reportedly stated that Gulu is among the high-risk district under investigation.

Gilbert Olanya, the Member of Parliament for Amuru district who also doubles as the General Secretary of Acholi Parliamentary Group said the government is given only two days to lift the lockdown in Gulu or else the locals shall stage protests.

Olanya was speaking on Wednesday morning from Gulu main Bus Park where hundreds of transporters and travelers were gathered.

“We need the government to open Gulu district immediately within one or two days, if not, we are ready to organize our people to sit on the streets even if for two weeks,” Olanya demanded.

“Right now we are surprised, you are blocking our buses, taxis and private transport means and you are allowing the truck drivers to continue moving. How biased!” he wondered.

Olanya alleges that the government’s move to impose lockdown on Gulu is a planned move to sabotage the livelihoods of the entire Acholi community.

Balson Onen, the L.C.I Chairperson of Bus Park Sub –Ward revealed that the higher authorities did not make official communication to the leadership of the Bus Park about the enforced lockdown, something that angered the local leadership.

According to Onen, a bus going to Mbale from Gulu was stopped on the way by security forcing the bus company to refund passengers’ money.

Aol Jennifer, a resident of Palaro Sub –County in Gulu district was left stranded at Gulu Bus Park after the vehicle she was to board to Kitgum district was stopped.

“Gulu is under lockdown among the eight districts. However, we have sought clarification from the center, so let’s keep calm,” said Lapollo 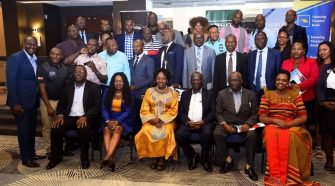 Kadaga Calls for Ease of Visa Access to Foreign Countries