The Prime Minister of Uganda, Dr Ruhakana Rugunda, has revealed that government is in talks with Rwandan authorities over the blocking of cargo trucks accessing Rwanda through the Katuna border.

On Thursday, drivers and traders using the Katuna border post were stuck on after the Rwanda Revenue Authority (RRA) blocked heavy trucks from using the border and instead diverted them to Kagitumba and Mirama hills border points.

In a communication to the Commissioner for Customs at Uganda Revenue Authority (URA), the Rwandan tax body (RRA) said with effect from Thursday, the trucks carrying heavy cargo will be diverted to Kagitumba and Mirama hills.

It indicated that the move is “in a bid to expedite the construction works currently taking place at Gatuna border posts that are aimed at extending smooth flow of goods and services at the border post.”

Rugunda who was Thursday responding to a matter of national importance raised by Bufumbira South MP, Sam Bitangalo in Parliament, said Foreign Affairs Minister, Sam Kutesa is leading the efforts to resolve the issue.

Bitangalo said “the conduct offends the East African Customs Union Treaty that provides free movement of people, goods and services across the territory”.

“The restriction imposed by the immigration and customs officials at the Katuna border has caused a lot of concern, anxiety and inconvenience to people on both sides of the border,” the legislator added.

He informed the House that the development has a negative impact on trade and business not only in Kisoro district, but also in other parts of the country. Bitangalo prayed for the intervention of Ministry of Trade and that in charge of East African Affairs as well as Internal Affairs.

In response, Rugunda said: “The matter being raised by Hon Sam Bitangalo is of great concern and I share your view that we are all working for deeper and peaceful integration”

“The Hon Minister of Foreign affairs, Ndugu Sam Kutesa is on top of this situation on behalf of government and has contacted people responsible both locally and regionally,” Rugunda told Parliament on Thursday.

“The matter is effectively handled by government. We further regret the inconvenience that the wanainchi [masses] and the business people have suffered because of this temporary situation,” added the Prime Minister before promising to the update the House on the matter on Monday. 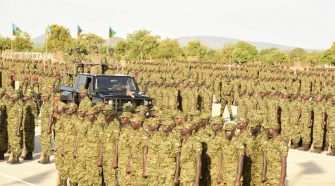