Government has Tuesday announced that the maximum deposit insurance limit offered to depositors in BOU-regulated financial institutions by the Deposit Protection Fund (DPF) has been increased from Shs 3 million to Shs 10 million.

This was revealed by Finance Minister, Matia Kasaija while addressing reporters in Kampala.

He said that the Shs 3 million maximum limit which had been set in the year 1997 has been revised upwards in order to reflect the macro-economic changes which the country has witnessed over the last 20 years.

“Government has taken a strategic decision to increase the deposit insurance from Shs 3m to Shs 10m. Since 1997, there have been changes including the substantial growth of deposits in the sector, inflation, foreign exchange rate movements amongst others,” Kasaija said.

At the insurance of Shs 10m, the percentage of the total deposits (Shs 20 trillion) in the sector that the new insurance limit will cover has gone up to 17 percent from 9 percent. This in money terms amounts to Shs 3.4bn.

The deposit insurance is the money given to a depositor in the event that a financial institution with which they have been saving closes. Officials from DPF explained that the insurance is determined by getting the total deposits of an individual and deducting any liability of that individual to the institution.

This is due to the assumption that customers with non-performing loans will have contributed to the closure of the institution. In the event that the depositor has a performing loan, he/she will be eligible for the Shs 10m insurance payment but they will enter into an agreement with DPF to ensure the loan is fully serviced.

Depositors eligible for the Shs 10m are only those that will have at least Shs 10m on their bank account at the time of closure.

According to the Financial Institutions Act, 2004, depositors will be paid within 90 days of closure f the contributing institution.

Speaking on Tuesday, the Finance Minister said the decision to raise the insurance limit by Shs 7 million is in line with government’s commitment to ensure that the banking sector remains safe and sound.

Kasaija encouraged Ugandans to save their money with financial institutions instead of keeping their savings in their homes and other places that are susceptible to risks.

The DPF was established as a legal entity following the enactment of the Financial Institutions Act of 2016 and is mandated to foster public confidence in the banking sector through protection of depositors of contributing institutions.

The Fund is funded through annual premiums remitted by all deposit taking institutions which are regulated by the Bank of Uganda commercial banks. The premiums are 0.2 percent of the average deposit liabilities of the particular bank in given financial year. The funds remitted to DPF are then invested in risk-free treasury instruments with an aim of generating interest.

Ben Patrick Kagoro, the Board Chair of DPF explained that the move to make the Fund independent is a guarantee by government that should a deposit taking institution fail, depositors will be reimbursed a certain minimum of insurance. He described the Fund as being one of the financial sector safety nets.

He said that given that the exchange rate for the U.S dollar (with the Ugandan Shilling) has more than tripled since 22 years ago when the deposit insurance limit in Uganda was set at Shs 3m, government found it prudent to make changes in the insurance payout.

Julia Clare Olima who is the chief executive of DPF said that currently, the Fund is worth Shs 650bn in terms of absolute figures and this is an increase from Shs 480bn in 2017 when the Fund became an independent legal entity. Over the past year, the Fund has earned interest of around Shs 80bn from its investment in treasury bills and treasury bonds.

Kagoro says the long-term goal is to grow the Fund into a loss minimize which will also be able bail out distressed financial institutions, at an interest. 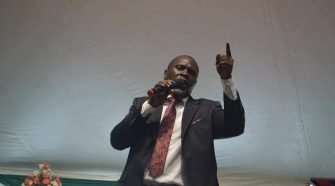 “Who Bewitced You?” – Abed Bwanika Scoffs at DP for Backing Besigye, Mbabazi