Tullow Oil plc, one of the joint venture partners in the Albertine oil development project has announced its plan to sell a stake in its 230,000 barrel per day project to TOTAL and CNOOC hit a snag arising from a taxation dispute with the Ugandan government.

The Joint Venture Partners had been targeting a Final Investment Decision for the Uganda development by the end of 2019, but the termination of this transaction is likely to lead to further delay.

In initial transactions between 2010 and 2012, Tullow acquired 100% of the three exploration licences but later farmed down a third of the equity to both CNOOC and Total.

The transaction was for a total consideration of USD 2.9bn and effectively unitised the basin equally between all three parties ahead of the basin development.

On 9 January 2017, Tullow announced it had agreed a substantial farm-down of its assets in Uganda to Total. Under the Sale and Purchase Agreement, Tullow would transfer 21.57% of its 33.33% interest in Exploration Areas 1, 1A, 2 and 3A in Uganda to Total for a total consideration of USD 900 million.

CNOOC Uganda Limited (CNOOC) subsequently exercised its pre-emption rights under the joint operating agreements to acquire 50% of the interests being transferred to Total on the same terms and conditions.

The farm-down would leave Tullow with an 11.76% interest in the upstream and pipeline, which will reduce to 10% when the government of Uganda formally exercises its right to back-in.

However, on Thursday, the Irish, London based multinational oil and gas exploration company issued a statement announcing that it has been informed that its farm-down to Total and CNOOC will terminate at the end of today, 29 August 2019, following the expiry of the Sale and Purchase Agreements (SPAs).

“Tullow has been unable to secure a further extension of the SPAs with its Joint Venture Partners, despite previous extensions to the SPAs having been agreed by all parties,” Tullow said.

The termination of this transaction, it said, is a result of “being unable to agree on all aspects of the tax treatment of the transaction with the government of Uganda which was a condition to completing the SPAs”.

Tullow says that while Tullow’s capital gains tax position had been agreed as per the Group’s disclosure in its 2018 Full Year Results, Ugandan Revenue Authority (URA) and the Joint Venture Partners could not agree on the availability of tax relief for the consideration to be paid by Total and CNOOC as buyers.

As such, the oil exploration giant says it will now initiate a new sales process to reduce its 33.33% Operated stake in the Lake Albert project which has over 1.5 billion barrels of discovered recoverable resources and is expected to produce over 230,000 bopd at peak production.

“Tullow has worked tirelessly over the last two and a half years to complete this farm down which was structured to re-invest the proceeds in Uganda,” said Paul McDade, Tullow’s chief executive on Thursday.

“It is disappointing to report this news at a time when we are making so much progress elsewhere towards the growth of the Group with our recent oil discovery in Guyana and the first export of oil from Kenya.”

He said the company is committed to reducing our operated equity stake.

Government said on Thursday, that the Minister of Energy had given a conditional approval to Tullow’s sale, “subject to inter alia payment of the taxes as assessed by URA in accordance with the laws of Uganda”.

“Tullow on the other hand sought transfer of its interest without payment of any capital gains tax arising from the sale and also on condition that certain tax deductions, not ordinarily transferable to the buyers be transferred to the buyers,” Robert Kasande, the Permanent Secretary in the Ministry of Energy said.

“Government maintains it has remained committed to enabling the licensees take the final investment decision including upgrade of critical road and other infrastructure, securing the necessary permits related to environment protection excess gas utilization and land acquisition”.

“We are therefore confident that as Tullow moves to re-initiate a new sales process, the JVPs will remain committed to fulfilling their tax obligations”.

Kasande said government will continue to work with the JVPs to ensure the final investment decision is achieved at the earliest and in a manner that safeguards the country’s interests and sovereignty while delivering healthy return on investment for the licensees. 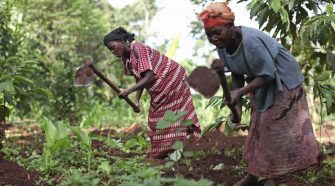 Only 2% of Govt’s Pledge on Hoes Fulfilled, Minister Cites Limitations to Tractor Use