Government has set up an Inter-Ministerial Committee that will coordinate the government response to the rising water levels which has resulted into flooding, displacement, as well as loss of lives and property.

The committee was instituted during Monday’s Cabinet sitting at State House and will be chaired by Prime Minister, Dr Ruhakana Rugunda. It will also comprise 14 Ministers and 7 Agencies.

Minister of ICT and National Guidance, Judith Nabakooba said that a multi-sectoral National Technical Task Team has also been set up and will be chaired by the Ministry of Water and Environment. This will provide technical support to the Inter-Ministerial Committee.

“A national response team by the Ministry of Works and Transport has commenced operations involving surveillance and removal of the floating islands in order to protect our dams,” Nabakooba said in a statement.

Government recently issued a nationwide alert warning that increase in rainfall will result into floods.

As of May 21, the average water level of Lake Victoria, Uganda’s biggest water body was 13.45 meters which is 5 centimeters above the previous historical maximum level of 13.4 meters recorded in 1964.

Increased outflow from Lake Victoria has raised the water levels of Lake Kyoga and Lake Albert with resultant flooding around those lakes and further downstream.

As of May 21, the Lake Kyoga water level had exceeded its historical maximum of 13.5 meters in 1964.

So far, this rise in water levels has caused erosion of lake shores, submerging of some small islands as well as flooding around the shores of Lake Victoria, Lake Kyoga, Lake Albert and the Nile system.

Government is advising people settling in mountainous areas of Rwenzori, Elgon and Kigezi that are prone to landslides to move to safe places with immediate effect.

People who are doing activities within protection ones of 200 meters from the lake shores, 100 meters from river banks and 30-50 meters from wetlands or within forest reserves have also been directed to vacate these areas.

Minister Nabakooza said the responsible law enforcement agencies have already started evicting all those in the protection zones. 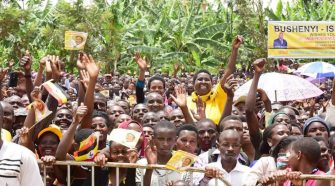 “This Intolerance Must be Stopped” – Museveni Hits at Age Limit Proponents