Government has come out to justify approval by Cabinet of the feasibility studies for the construction of a hydro power dam at the Uhuru water falls in the Murchison falls national park, saying it is in line with efforts to meet the growing need of electricity.

The tourism industry is protesting the plan which they say will negatively affect the park which attracts about 800,000 tourists and earns the country foreign revenue.

They also add that it is retrogressive to the conservation of natural attractions that make Uganda unique.

Some tourism operators as well as other stakeholders like the Bunyoro-Kitara kingdom have said the dam will affect the Murchison waterfalls, themselves and that this is precarious since the waterfalls give the park identity.

While giving a response to the concerns, the Minister of Energy, Eng Irene Muloni said that Uhuru Falls and Murchison Falls are separate falls that are only adjacent to each other.

She however acknowledged that indeed Government of Uganda signed a Memorandum of Understanding with M/S Bonang Energy and Power Ltd, a South African company leading a Consortium that includes among others Norconsult and JSC Institute Hydro project, to undertake detailed feasibility studies.

She said that in August, Cabinet was informed of the power developments in the country among which was Uhuru falls but Cabinet halted the Uhuru process.

However, Muloni revealed that during a Cabinet sitting yesterday, Monday, the August decision was reviewed. Cabinet agreed that a feasibility study be undertaken on the Uhuru falls site.

This is inna bid to make a scientifically informed decision, Muloni said.

She said the National Development Plan (NDP) II prioritized investments in energy infrastructure with a focus on the exploitation of the abundant renewable energy sources including hydropower, so as to increase power generation capacity from 825MW in 2012 to 2,500MW by 2020 and expansion of the national electric power grid network.

Quoting statistics from the Uganda Bureau of Statistics (UBOS) electrification survey, the Minister said the national electricity access rate now stands at 50% with 26% on the grid and 24% on the off-grid.

“According to Vision 2040, for Uganda to achieve the desired socio-economic transformation, it will require to have 41,738 Mega Watts by the year 2040 thus increasing the country’s electricity consumption per capita to 3,668 kWh,” she explained.

“In addition, access to the national grid will also have to increase from the current 26% to over 80%”.

One of the concerns from the players in the tourism regarding the Uhuru hydro power dam project has been that Uganda prides in having surplus electricity, thus a decision to construct a dam at the expense of a tourist site is illogical.

Instead, they advise that government opts for alternative sources of energy such as solar, since Uganda is gifted with sunshine throughout the year.

But Minister Muloni says the 25 Industrial parks across the country that government plans to construct will need huge volumes of power to accelerate industrialisation, value addition and job creation.

“The excess power we are currently having will be absorbed as soon as these industrial parks are completed”.

Regarding the environmental impact likely to be caused by the Uhuru project, government says approval of any permit for a feasibility study is guided by the Electricity Act, 1999, which stipulates that the impact of a proposed project on public and private rights is considered.

“This includes consideration of the environmental, economic, social and cultural impacts of a proposed project on the existing power and eco-system and also undertaking consultations among the various stakeholders,” the Minister said.

“In making the decision, Cabinet considered the need to have the feasibility study undertaken because that is the only scientific way to determine the impact of the project on the environment, tourism and ecology at the proposed site”.

Muloni said the feasibility study will include assessment of the technical, environmental, socio-cultural, economic and financial viability of the project.

“Government will ensure thorough supervision of the feasibility study so that its interests are taken into consideration including bench marking where similar projects have been previously undertaken in ecologically sensitive areas”.

“What I want to assure you is that conservation of flora and gain a isn’t a choice by anyone. It s a command from the Constitution. You should never do y the commitment of government and leadership on conservation,” Kamuntu said.

“The Constitution states that the State shall protect important natural resources including land, water, wetlands, oil, flora and fauna on behalf of the people of Uganda….. It goes on to command that development will be balances to endure the resources are for the benefit of the present and future generations”. 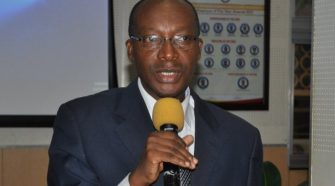