The government of Uganda has lashed out at Bobi Wine’s American Attorney, Robert Amsterdam following his recent comments regarding the alleged torture of Kyadondo East MP, Robert Kyagulanyi alias Bobi Wine and ‘assassination attempt’ by government.

The government says his negative references to Uganda and his continued allegations that imply that the State was responsible for torturing Bobi Wine are “false” and “nosensical”.

According to the Bobi Wine official legal media centre website, “Robert Amsterdam has called for greater international pressure to protect human rights in Uganda, and specifically to single out the officials responsible for alleged abuses under the Global Magnitsky Act legislation”.

“Mr. Kyagulanyi’s arrest was not only a politically motivated act of repression, but furthermore he has since been subjected to inhuman and horrific acts of torture by the Ugandan security services from which it is possible he may never recover,” Amsterdam is quoted as having said last month while Bobi Wine was still in detention.

“This outrageous and reprehensible act of state aggression – an episode not seen since the days of Idi Amin – requires a robust and broad response from the international community to secure his safety and to bring his torturers to account,” the lawyer added.

But the government spokesperson, Ofwono Opondo in a statement issued on Thursday said that if Bobi Wine indeed has torture allegations against the State, then he should return to Uganda and press charges, rather than using “diversionary tactics”.

“The case of the Member of Parliament (MP) Robert Kyagulanyi a.k.a Bobi Wine, is before courts of law in Uganda for treason and inciting violence, and no doubt, his lawyer[s] Robert Amsterdam and others are trying to get him off the hook by employing diversionary tactics in raising the tantalizing, although unproven, allegations of torture,” Opondo said.

His comments come only hours ahead of Bobi Wine’s scheduled international press conference which will happen at 5pm (EAT) in Washington D.C, U.S. It will be the the second time the legislator and singer will be speaking to the press since his arrest weeks ago in Arua district. He was interviewed by BBC earlier today.

At the press conference to be held at the National Press Club, Bobi Wine will address his current condition after suffering the alleged torture and abuse following his arrest. He will be accompanied by Amsterdam.

Bobi Wine accuses the military of breaking into his hotel room in Arua, beating and causing injuries to him severely, hurting his genitals and forcefully administering ‘medication’ to him while in jail.

“Mr. Amsterdam’s false and negative references to the Uganda government aren’t entirely surprising. If indeed Bobi Wine was tortured or injected with unknown substances, as being claimed, he should quickly return to Uganda to raise those matters before court, where the trial will be, and they shall transparently be investigated, and culprits punished,” Opondo said.

He said that Bobi Wine isn’t the only suspect facing treason charges, and that the Uganda state doesn’t use assassination against its opponents or even enemies.

Recently, Amsterdam said: “When a state behaves with this level of impunity and violence, there are few statements or resolutions that will stop them from the murder of an innocent opponent like Bobi Wine. That’s why we need to hit these officials in their wallets with a Magnitsky-style sanctions schedule as they need to understand the consequences of this attack on human rights”.

The Global Magnitsky Act empowers the U.S government to impose visa bans and targeted sanctions on individuals anywhere in the world responsible for committing human rights violations or acts of significant corruption.

He further downplays the claims by Bobi Wine’s lawyer regarding his health state arguing that Amsterdam is not competent enough to determine his client’s medical condition than the Uganda Medical Board which examined Bobi Wine before he flew to the U.S for medical treatment last week.

“We strongly reject Mr Amsterdam’s reference of the Uganda government as a ‘criminal enterprise because Uganda is governed in accordance with our own democratic Constitution, laws and rules, as well as respect to recognised international standards,” he said.

Amsterdam was blocked from coming to Uganda in August after government reportedly declared him persona non grata.

In diplomacy, persona non grata is a foreign person whose entering or remaining in a particular country is prohibited by that country’s government. 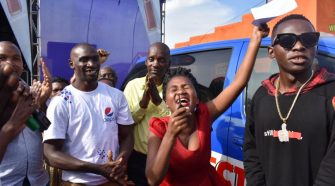