Government together with the UK government have Sunday broken ground for a USD 200m (Shs 735m) project that seeks to develop critical infrastructure within the Kampala Industrial Park in Namanve.

Government says this will ease accessibility, provision of utilities, make the park more organized and make it easy to attract new businesses.

The project will include upgrading of roads to paved surface and other utilities such as water, high voltage electricity and communication lines extended to the park. The other project components include waste management, street lighting and street naming as well as development of an SME park for incubation.

Out of the 45kms in the park, only 7.5kms is tarmacked. Water supply covers only 10 percent of the park while electricity covers only 24 percent. The park also lacks a robust drainage system.

The project will be undertaken by UK firm, Lagan Dott in joint venture with local construction firm, Dott Services. The feasibility study was conducted by Lagan Dott and the British High Commission in Uganda.

The project will be implemented using a USD 200m loan financed by UK Export Finance. 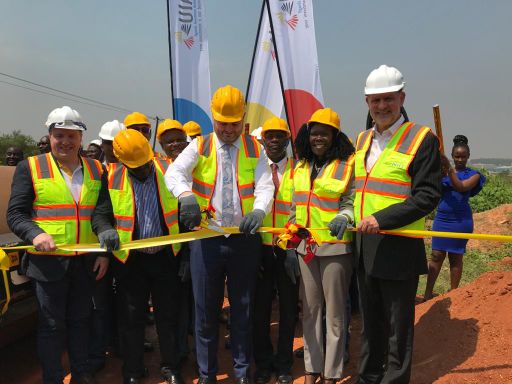 Speaking at the event, Minister Evelyn Anite said the decision to develop infrastructure within the Namanve Industrial Park was in line with government’s plan to support industrialization and create the much needed employment for Ugandans.

She said that upon completion of the project which will take 48 months, at least 500 companies will be operating there, and employing about 200,000 people.

“That means the young people on the streets will be working and that Uganda will no longer be a supermarket for Chinese products. We will have the capacity to manufacture these products locally.”

She warned the contractors against engaging in shoddy works and corrupt practices.

Gen Katumba Wamala hailed the British government for choosing to invest in developing the park’s infrastructure. He commended the fact that the project has a local content (Dott Services) component in it. The Minister placed emphasis on contractors ensuring the environment is protected in the implementation of the project.

“Government is fully committed to lowering the cost of doing business. We are in the process of repairing the meter gauge railway, developing the Bukasa port and constructing the Kampala – Jinja expressway”.

The UK Minister, Andrew Stephenson termed the project as a beginning of a much deeper partnership between Uganda and the UK. He added that it is part of UK’s efforts to be the investment partner of choice to Africa.

This, he said, is even necessary given the UK’s wealthy capacity in business know-how, technology and keen interest in sustainable development.

“After Brexit, the UK hopes to engage in closer trading partnership with Africa that will bring mutual prosperity and support Uganda’s ambition to become a middle-income country,” Stephenson said.

He said development of infrastructure is important in strengthening Uganda’s industrial base and providing jobs which in the long term will expand the county’s domestic revenue.

The Kampala Industrial and Business Park, located 11kms east of Kampala is Uganda’s flagship industrial park created in 1997. It is presently the biggest industrial park in Uganda.

It sits on 2,200 acres of land and is characterized by light and heavy industries in the sectors of manufacturing, agro processing, ICT, mineral processing, vehicle assembling, freight and logistics handling, tourism and services among others. 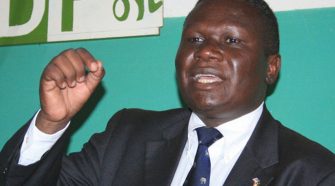