Government officials, NRM Party leaders and opposition leaders have Thursday agreed to set up a team that will come up with regulations for the proper implementation of the Public Order and Management Act (POMA), 2013.

The decision was arrived at during a high level meeting of the said leaders coordinated by the Inter Party Organisation for Dialogue (IPOD) Council. The meeting was chaired by the Democratic Party (DP) Deputy Secretary General, Gerald Siranda.

While reading the joint communique, Siranda noted that the meeting of Government and IPOD Council was aimed at considering the implementation of POMA, 2013.

He said that the meeting follows the directive of the IPOD Summit which sat on December 12, 2018 where political party principals resolved that a harmonized approach for the implementation of POMA be deliberated upon.

“The meeting has thus resolved to set up a committee comprising of the Attorney General and the Secretaries General of the five political parties that are represented in Parliament,” Siranda said.

Siranda said the committee will be tasked to examine the POMA taking into account the harmonized interpretation by the Attorney General and the Shadow Attorney General issued in a press release of December 8 2015.

He said that given the urgency of the matter, the committee shall report back to the IPOD Council within a period of ten days from today.

Commenting on the resolution, the Leader of Opposition in Parliament (LOP), Betty Aol Ochan noted that she is optimistic that once the regulations that will have been worked upon by IPOD come to pass, the contentious law could cease to be abused.

Ochan pointed out the misinterpretation of “a notification to Police” to mean “seeking permission from Police” as one of the issues that the committee should pronounce itself on.

For a long time, the political opposition have accused government of hiding under the guise of the Public Order Management Act to clamp down on opposition activities which they say is a total violation of their rights to assemble as well as mobilize supporters.

In recent days, a number of FDC meetings in Western Uganda including radio program appearances where former FDC President, Kizza Besigye was featured were blocked by Police which said the party officials had not followed the guidelines in the law.

From the side of government, the meeting was attended by Prime Minister, Ruhakana Rugunda who chaired the session, the Minister of Internal Affairs, Gen Jeje Odongo, the Minister of Security, Gen Elly Tumwine, the Minister of General Duties, Mary Karoro Okurut, the Deputy Attorney General, Mwesigwa Rukutana among others.

The opposition was as well represented by the Leader of Opposition in Parliament (LOP), Betty Ochan and the different party whips among the IPOD Council members. 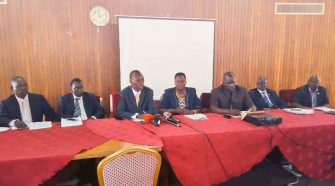