Government has directed all Non-governmental Organizations (NGOs) operating in Uganda but do not appear on the validated register to stop operations immediately.

This after findings of a validation exercise conducted on NGOs operating in Uganda indicated that only 2,118 NGOs representing 14% of the 14,207 organizations that were on the national NGO register as of July 31 this year, met the requirements by government.

As of July 2019, the National NGO Register had indicated that there were 14,207 registered NGOs in Uganda. A total of 12,809 organizations of these were indigenous, 803 were foreign, 439 were international, 81 regional and 71 were operating on the entire African continent.

The figures were generated in the recent verification exercise by government which sought to ascertain the number of registered NGOs operating in the country.

“By the 7th of August 2019, it was noted that only 3,810 NGOs which is about 27 % of 14,207 had valid permits while 10,397 had invalid permits. In other words, 10,397 NGOs were operating without valid permits,” the State Minister of Internal Affairs, Mario Obiga Kania told reporters at a news conference in Kampala on Wednesday.

The Minister said that between August 8 and September 7, 2019, all registered NGOs with valid permits were subjected to another validation exercise.

He said the validation was intended to weed out inactive and unauthentic NGOs as well as eliminate NGOs with obscure and unscrupulous and unclear objectives that were damaging the reputation of the NGO sector.

By the close of the last validation exercise, we had 2118 registered NGOs with valid permits and who had been validated to have fulfilled the regulations of the NGO Bureau.

This will help the public and other stakeholders to deal with only registered and licensed NGOs, he added.

“All NGOs which do not appear on the validated register should stop operations immediately,” Minister Obiga Kania said, urging stakeholders especially district and sub-county NGO monitoring committees, Financial Intelligence Authority, Police, hotels and other sectors to crosscheck the status of any NGO with the register on the website or with the NGO Bureaus “to ensure such NGOs do not operate in any part of the country or transact any business with their institutions”.

The Minister also said that government will no longer tolerate the haphazard manner of operations where some NGOs conduct activities in different parts of the country and pull out at will, without notifying local authorities.

“This is unacceptable All NGOs must align their programs with the sub-counties or with the districts and they must report their presence to those centres of authority before they go to the lower levels of government”. 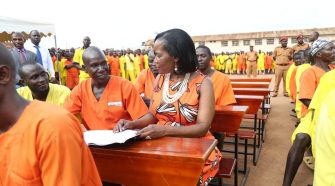