KABALE – David Bahati, the State Minister for Finance has re-assured residents living near Lake Bunyonyi that government is in final stages to provide a ferry for travellers across Africa’s second deepest Lake.

During presidential campaigns in 2015, President Yoweri Museveni pledged to provide a ferry at Lake Bunyonyi in order to ease transport across the lake which had become a death trap for communities across the lake.

In August 2016, five members of the same family drowned in Lake Bunyonyi while traveling in a canoe from a party in Mushebeya, Kamugangunzi Sub County, to their home in Kabirago Ndarura Village, Rubaya Sub County.

A 25-year-old woman and her 11-month-old baby in November, 2017 drowned when the dug-out canoe they were sailing in capsized in the middle of Lake Bunyonyi, as they crossed to attend a burial of their relative.

June, 2018 saw the death of 5 people from Rubanda district that were using a local boat to cross to Karambo village, where they always cultivate. When they reached in the middle of the lake amidst much wind, the water waves made the boat capsize and all the five drowned.

In the night of August 18 2018, Davis Rukundo, a resident of Kyabahinda village, Kagarama Parish in Bubare Sub County drowned in the same Lake while canoeing. The incident occurred when an identified motor Boat engine knocked his canoe before it over turned before he drowned.

Bahati said that government through the relevant ministries is considering the provision of a safer transportation mode on this lake.

“We shall have this ferry transporting locals for free and all you need to know is the time it will be at a dock near you for easy movement,” said Bahati.

He was speaking to Christians at Kitooma Church of Uganda in Rubaaya Sub-County, Kabale district.

During the service, Bahati donated Shs 10m towards the roofing of the church.

Bahati further said that government is also considering the upgrading of Kabale-Bunyonyi road to boost tourism in the area.

“There has been a general outcry from residents and tour operators in this area about the state of Lake Bunyonyi road but on a positive note this road has been earmarked for upgrading. We are going to tarmac this road to boost tourism in the area,” added Bahati.

Locals in the area said that a ferry is all they are waiting for to enjoy their movement across this lake.

Alice Tumwesigye said canoes are very risky yet they are the sole means of transport available for them.

Tumwesigye said that because public canoes are always overloaded, the lives of passengers are always put at risk.

“Crossing Lake Bunyonyi is one of those risky things we encounter on a daily basis, Imagine a whole family sailing with a canoe and above all none of us has a life jackt,” he said.

The Rubaya sub-county Chairperson, Canon Enock Kazooba said that lack of efficient transport means for people surrounding Lake Bunyonyi has led to an increase of accidents by drowning.

“It is known by everyone here that almost all the accidents registered on Lake Bunyonyi are as a result of poor transport means. If the ferry comes we shall be in a better place,” he said. 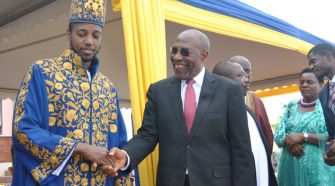