The Minister of State for Primary Health Care, Joyce Moriku Kaducu has revealed that the Ministry has employed all necessary efforts and measures to ensure that the Cholera outbreak in Kampala is contained.

The Minister said this on Wednesday while making a statement on the floor of Parliament following the suspected cases of Cholera outbreak in Rubaga division, Kampala city.

Ministry of Health received a report of four suspected cholera cases on January 5. The patients had been seen at Kirudu Hospital presenting with signs of diarrhea and vomiting.

According to Minister Kaducu, the health workers in Kirudu hospital immediately suspected cholera and gave the patients appropriate medical care.

“Following the report, that same day the Ministry made arrangements to transfer the suspected cases to Naguru China-Uganda Cooperation Hospital where cholera treatment centre was established,” she told Parliament.

Kaducu said that three more patients were received the following day and as of today (Wednesday), there are 10 suspected cholera cases, two of which have been confirmed.

“Majority of the cases have improved and will be discharged soon. There are no reported cholera cases in Nakawa, Central and Kawempe though our teams are on the ground conducting sensitization and passive search,” she said.

The Minister told fellow legislators that government has since taken immediate actions to control the outbreak which among others include opening the treatment centre in Naguru hospital.

“The Ministry has since earmarked an ambulance to pick and transfer any suspected patient to the treatment centre in Naguru Hospital which is accessible 24hours by calling officers, Willy Musisi on 0794661082 and Molly Tusiime on 0794661134.”

She added that to address the risk factors for the outbreak, joint measures with KCCA, UNICEF, Uganda Red Cross (URC) and the affected communities have been taken including sensitization on Cholera prevention through home visits and Information, Education and Communication (IEC) material.

Kaducu also said that government has embarked on emptying of filled latrines in Kabowa and Bukasa as well as inspection of homes by the health workers and URC volunteers to educate the communities on cholera prevention. 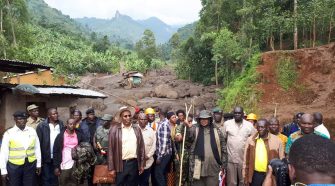