Just days to the financial year 2019/2020, the Ministry of Works and Transport, the Ministry of Water and Environment, and the Office of the Prime Minister have run to Parliament seeking Shs 45bn as a supplementary budget to address the impact of rising water levels in the country.

The supplementary budget has been tabled by the acting Permanent Secretary at the Office of the Prime Minister, James Dombo who had appeared before the Parliament committee on budget chaired by Ntenjeru North Member of Parliament (MP) Amos Lugoloobi.

Dombo told legislators that of the Shs 45bn, a sum of Shs 7.5bn will be used to fund activities that will ensure the safety of hydro electric dams.

Dombo noted that Shs 32bn will be used for protection of lives and property in which they plan to acquire life saving and personal protective equipment, map flood prone areas, sensitize people within wetlands, immediately evict illegal settlers from flood prone areas, resettle people displaced by floods, repair drainage structures like bridges among others.

Dombo added that the other funds shall be used to fund surveillance and operations.

The Director of Water Resources Management at the Ministry of Water and Environment, Florence Adong informed MPs that the problem of high water levels is not likely to end soon as they had anticipated.

Adong said the Ministry anticipated a sunny season in the month of January, July and September but the recent weather forecast reveals otherwise.

“We had expected that the January, July, August, September forecast would be normal, when we would have a lot of sunshine so that much of the Lake Victoria water can be evaporated but from the recent forecast, it’s not going to be like that. We are expecting some more rains especially in the islands and that will add on the problem we have now in the near future,” Adong said.

Government agencies have recently embarked on an exercise to harvest floating islands that pose a threat to the Nalubaale hydro power dam.

So far 15 hectares (37 acres) and 40 acres of floating islands in Jinja and Portbell respectively, have been cleared according to a recent update by Hellen Adoa, the Minister of State for Agriculture, Animal Industry and Fisheries.

Increasing water levels have led to many floating weeds; some in form of floating islands and commonly referred to as suds which affected Nalubale hydropower dam, some bridges and landing site infrastructure in different parts of the country.

Heavy equipment was deployed at the Nalubale Dam including long arm excavators, dump trucks, self-loading trucks, barges, vessels and ferries, to facilitate the exercise of harvesting any remains of weeds/suds for the safety of Nalubale dam.

According to Minister Adoa, a total of 15 hectares of weeds have been harvested in Jinja areas of Masese, Kirinya and Wairaka. This excludes the over 6 acres previously harvested at the dam.

Similar heavy equipment was deployed at Port Bell, and so far, about 40 acres of weed have been harvested.

There are also other problem areas where many floating islands are roaming and these include Bunjako Bay (Mpigi/Kalungu), Sango Bay and River Kagera (Kyotera), and Fielding and Thruston Bays (Jinja/Mayuga)..

“The floating islands are a danger to hydropower generation, and have also affected ship transport at Portbell, blocked fish landing sites and bridges, affected fishing activities including interfering with fish breeding, and are a hiding place for fish men doing illegal fishing practices,” the Minister said. 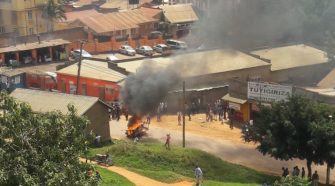