The Attorney General, William Byaruhanga on Thursday tabled before Parliament, Electoral Reforms through a number of bills that are to be considered by the House.

The presentation of the reforms follows recommendations of the Supreme Court during the Presidential petition No.1 of 2016 which would be presented before the house within a period of two years.

Despite a number of reminders from a number of stakeholders government has been hesitant from presenting the reforms before Parliament.

In bid to mount pressure on government, a law suit was filed against the Attorney General and the opposition through the Shadow Attorney General, Wilfred Niwagaba has since sought for leave to introduce a private members’ Bill that entails a number of reforms.

The Supreme Court in 2016 recommended that the time for filing and determination of a presidential election petition be increased from 30 to 60 days, use of oral evidence in addition to affidavit evidence be accepted in court as well as time for holding fresh election where the previous elections has been nullified be increased from 20 days.

The Bills have been referred to the committee on Legal and Parliamentary Affairs for consideration and report back to the House.

Some of the highlights of the reforms include prohibiting cameras and phones from polling areas.

They also provide that “No Political parties shall have any links or alliance with any Pressure groups”.

Candidates shall not be allowed to run independent of a party after participating in a party primary.

The other provision states that an ex-party member can run as independent at least one year after quitting their parties with written proof from the party.

Declaration of results shall be made in the presence of five people.

Upon election as independent, a member shall be free to enter into alliance with any party of his or her choice.

Independent presidential candidates shall not enter alliance with any political party.

In addition, all candidates shall within 14 days after nomination inform the electoral commission, the sources of their funding.

Electoral Commission shall have powers to gazette an area a restricted area in the event of insecurity or disease outbreak.

Security personnel (police and military) shall be allowed to vote at least five days to the general polling date. 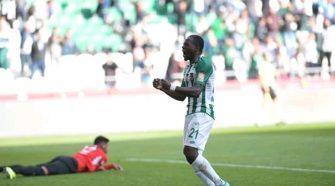 Miya Scores as Genclerbirligi Hold Konyaspor to a Draw