Government has Thursday tabled before Parliament new regulations that will be followed by all political parties and organizations in the country while organizing internal activities without contravening the measures that were put in place in the fight against the COVID-19 pandemic.

The regulations were tabled by the Minister of Justice and Constitutional Affairs, Prof Ephraim Kamuntu who noted that the regulations are aimed at safeguarding the health of the participants at the same time without affecting political party activities.

Kamuntu said the regulations are to enable a political party or organisation to elect leaders and sponsor candidates for nomination for general elections without compromising the health and safety of its members or the public.

“The regulations are aimed at enabling a political party or organisation to elect leaders and sponsor candidates for nomination for general elections within the limitations imposed by the Public Health Act and the Rules made there under relating to public health restrictions or measures,” Kamuntu said.

The Minister noted that in the exercise of the political activities, all political parties and organizations must observe the guidelines that were issued by the Ministry of health in the fight against COVID-19 pandemic.

“The extension of the term of office of elected members of organs of the political party or organisation shall be for a period not exceeding six months from the date of lifting the restrictions or other measures imposed by the Public Health Act, and the rules made there under for the control of infectious diseases,” Kamuntu said.

The regulations have been forwarded to the Committee on Legal and Parliamentary Affairs for perusal and will report back to the house within two weeks. 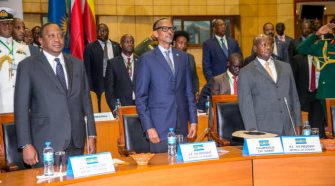 EAC Presidents Agree to Test Truck Drivers from Points of Origin, Tests to be Done Every 2 Weeks