Prime Minister, Dr Ruhakana Rugunda has revealed that government will on Saturday April 4 commence the distribution of food items to vulnerable people in the country.

This follows a commitment made by President Yoweri Museveni that government would give food to all vulnerable people who depend on daily income for survival since their businesses have been shut down as a measure to fight the spread of COVID-19.

The President noted that the groups of people who are expected to benefit from the food relief include the taxi drivers, street vendors among others.

While giving an update to Parliament on the situation of COVID-19 in the country, the Prime Minister noted that the distribution of food will commence from Kampala and Wakiso district.

Rugunda said that the distribution of food relief will be done at LC1 level were the chairpersons shall be helped by security officers who will ensure security.

Rugunda said that during the distribution, each individual shall be given 6 kilograms of Maize flour, 3 kilograms of beans and salt.

He added that pregnant and lactating mothers as well as the sick shall as well be given 2 kilograms of powdered milk.

On the other hand, the Prime Minister noted that more interventions are being put in place in the fight against COVID-19 noting that government is currently recruiting additional 220 health workers to the support COVID-19 response in the country.

He added that government is also considering adopting Rapid Diagnostic Test kits pending approval by World Health Organisation (WHO) and this will expedite the testing process and allow for increased numbers screened for COVID-19.

The Prime Minister noted that government is working on decentralization of sample collection from suspected cases at the district level by the District Health Team and transporting the samples through an established transport network to Uganda Virus Resaerch Institute (UVRI) in Entebbe. 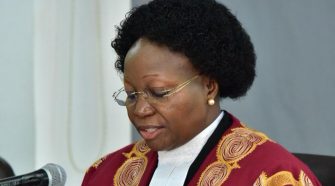