Tax body, URA, says it will this April launch the much awaited digital stamping system that is expected to curb illicit trade, seal revenue leakages as well as increase efficiency in managing taxpayer compliance.

The new stamps solution is part of a scheme by Uganda Revenue Authority (URA) and Uganda National Bureau of Standards (UNBS) to boost revenue collection and ensure products meet standards.

According to Clare Musiime Bakanga, the Change Lead for the Digital Tracking Solution (DTS) project, the stamps will enable manufacturers, distributors, retailers and consumers conveniently verify and trace all specified goods throughout the distribution chain.

Digital Tax Stamps are physical paper stamps which are applied to goods or their packaging. They will contain security features and codes to prevent counterfeiting.

The stamps will also bear tamper-proof features, track and trace capabilities that enable consumers validate the stamp. They will enable traders and manufacturers track the product movement and government to monitor compliance of the product and stamp.

Another fetaure is a Quick Response (QR) code that allows distributors, retailers and consumers to use an App on their smart phones to verify the authenticity of the products.

Musiime told reporters on Thursday that a phased implementation of the new digital stamps will take effect this April, starting with tobacco products like cigarettes.

This will be followed by beers, spirits and wines in July this year. Implementation for sodas is scheduled for August while that of bottled water is set for September.

“With this new system, we will deal with the issue of cases of stamps going amiss. It will also strengthen accountability and curb illicit trade,” Musiime told reporters during a half-day training workshop at the URA headquarters in Nakawa.

“We need to manage the problem of transparency which has always created mistrust between URA and the manufacturers. URA says ‘you manufactured 10,000 bottles’, the manufacturer claims they only produced 5,000”.

In April 2018, URA reported that it had seized at least 1,685 cartons equivalent to 16.8 million sticks of illegally imported cigarettes worth Shs 1.6 billion in value, in a period of six months.

The illegally imported cigarettes had cost government Shs 2.5 billion in tax revenue. The bulk of the contraband was seized from Malaba, Busia, Busitema border posts as well as in Kampala.

This is the trend that goverment intends to stop, with the implementation of the digital tracking solution, Musiime said.

Manufacturers and importers will be required to register in the URA online system either as an importer or manufacturer. Once an account is created for company, the importer is then obliged to make their forecasts for the volumes of products being imported. This will curb the vice of underdeclaration of goods.

At the tail end of the production process, a machine will affix a stamp on the final product before it is packed. The system also captures details of brand and sizes. Then UNBS stamps the product with a certification to ease verification by consumers and other stakeholders.

On the issue of costs for the implementation of this system since it requires hardware, Namitale Damalie, the Team Lead for the Digital Tracking Solution project said that government will foot the costs of equipment and training of the manufacturers. But this only caters for local manufacturers, tax compliant clients as well as those that are registered.

“Their (manufacturers) cost will be that of the stamp,” she said.

“We have been engaging the manufacturers, importers and other stakeholders since 2017. They are aware of what we are bringing on board”.

Regionally, Kenya, Tanzania and Rwanda have already implemented this system with Uganda now trying to catch up.

Musiime emphasized the need for extensive sensitization of consumers on the dangers of using counterfeit products as well as to educate them on how they can verify genuine products under the new system.

Users without smart phones (DTS App) will be able to SMS the QR code to a provided number and get response on whether or not the product is a counterfeit. 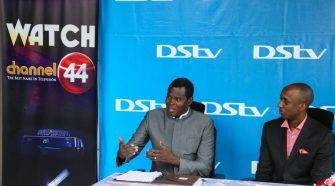