The State Minister of Privatization and Investment, Evelyn Anite, has revealed that government is set to withdraw land from at least 60 investors who were allocated land in the Kampala industrial business park (Namanve) but have not utilized it.

Anite said that government is investing a lot towards its industrialization agenda, and as such, it will not tolerate “speculators”.

She was speaking to reporters on Sunday on the sidelines of the groundbreaking ceremony for the Kampala industrial business park infrastructure development project, in Namanve.

The project is supported by the UK government which offered loan financing worth USD 200m (Shs 735bn) to Uganda to develop infrastructure such as paved roads, water, electricity, communication lines, drainage systems in the business park.

Namanve which sits on 2,200 acres of land is currently the biggest industrial park in Uganda.

Currently, 430 acres (19 percent of the total park land) are fully built up with 49 operational industries. However, 15 percent of the land is yet to be allocated while 23 percent (521 acres) are new allocations.

While government’s model on industrial parks is to allocate land to industrialists to establish production lines, some of the businesses have held onto the land for years without operation.

The Uganda Investment Authority (UIA) guidelines stipulate that a particular investors is given 18 months to make use of the land after which, government has the discretion to withdraw the land.

According to Minister Anite, government has always found itself in a difficult position where the investors attribute their delayed utilization of land to the failure (by government) to develop infrastructure in the park.

“It’s been a little hard because every time you wanted to withdraw land from them, they would tell us ‘But you’ve not your part of the job – infrastructure’,” Minister Anite said.

“Now that we are doing infrastructure, strictly 18 months. You do not develop, we will withdraw the land”.

She said that when she assumed the role of Minister of Privatization and Investment, there was only 19 factories. And that she started by withdrawing land from those who were not using it.

“The developing period is 18 months. So within 18 months, if you don’t develop, we withdraw the land”.

“And I can tell you, we have about 60 companies who have held the land for longer than 18 months period, without clear reasons. We’re going to withdraw it and give it to people who are serious”.

By investing in improving critical infrastructure in the business park, government is looking to attract more investment and in the long term create employment for Ugandans, she said.

“We can’t be borrowing money for infrastructure and then we have speculators holding onto the land,” Anite said.

She warned that the issue of investors who pose as manufacturers yet all they do is import finished products and package them here in Uganda.

Commenting on the Shs 735bn infrastructure project whose works have been launched, she said it is a positive development which will enable the country reduce on its import bill and increase its export bill. 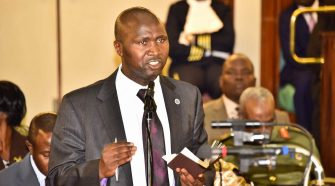