The State Minister for Internal Affairs, Mario Obiga Kania has noted that government is yet to find out why Police decided to besiege the home of Kira Municipality MP, Ibrahim Ssemujju Nganda last week.

Last week on Friday, Police sealed off Ssemujju’s home and blocked him from attending a planned rally in his constituency.

The rally was to be addressed by a number of opposition politicians as well as NRM legislators that voted against the passing of the contentious Bill that repealed Presidential age limits last year.

The Minister’s response followed a matter raised by the Leader of Opposition in Parliament (LOP), Betty Aol Ochan who complained about selective implementation of the Public Order Management Act. Ochan was concerned that the law targets only the opposition political players.

She cited the Friday incident in which Police deployed heavily outside the home of the Kira municipality legislator preventing him from proceeding to the political rally, yet according to Ochan, Police has often given a green light to a number of rallies organized by NRM leaders.

“he Uganda Police and the POMA have almost made it impossible for Members of Parliament especially from opposition to interact with their constituents,” Ochan said in her submission to the House.

The Leader of Opposition added, “On Friday, Hon. Ssemujju was put under house arrest for a whole day because Police would not allow him to address a rally in his constituency”.

While responding to the concerns by the Leader of Opposition, the Minister for Internal Affairs informed Parliament that it was not true that Semujju had been stopped from holding his rally.

Minister Mania said that Police only cordoned off the MP’s home on grounds that government is yet to establish.

“Ssemujju was not stopped at the rally, the Police sealed off his bungalow at his home. Why they sealed it off is what we need to find out. It is not necessarily that they may have sealed it off because of a rally,” Obiga said. 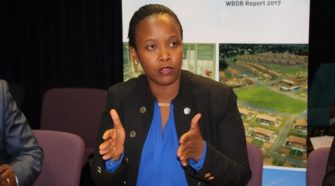