Police has arrested seven people suspected to be part of the criminal gang which has been involved in theft Boda Boda and subsequent murder of cyclists in the Greater Masaka area.

According to CP Fred Enanga, the Police spokesperson, the operation led by the Police Flying Squad in Masaka, involved districts of Masaka, Sheema, Kyegegwa and Lyantonde.

Others are Asingwiza Dickson from Lyantonde, Ssekyomo Timothy, Mutebi Majid from Kayabwe and Jjumba David from Nansana.

“On July 15, out task team in greater Masaka arrested the four suspects Ssenyonjo Mark, Benyanira Christopher, Matovu Abbas from Masaka and Aturhaire Jordan from Lyantonde in connection with the murder of a Boda Boda rider in Sheema district and the eventual subsequent robbery of his motorcycle,” he says.

“We got them charged in court in Sheema with robbery and Murder,” he adds.

On August 12, Police arrested Kawuki Hussein and Katongole Shafik and found with two motorcycles Reg No UES 310R and UEG 015R which were recovered and exhibited in Masaka district before charging the suspects with robbery and murder.

They were planning to sell the stolen boda boda in Masaka district, Enanga says.

He explains that Ssekyomo Timothy was arrested and found in possession of a suspected stolen motorcycle Reg No UEU 416N adding that the case file of the suspects is with the office of the DPP and her expected to appear before the magistrate any time soon.

Further Police operations over the weekend also saw Mutebi Majid from Kayabwe, who led to the arrest of Jjumba David both suspected dealers in stolen motorcycles in Nansana Wakiso district over the weekend.

“When we searched his premises, we found him in possession of a suspected stolen motorcycle Reg No UEX 995 W,” explained Enanga.

He says the gang has been using knives to stab victims to death as we as using ropes to wail the motorcycle riders. Enanga adds that: “They stand on each side of the road and then you come and you are trapped by the rope. This has been happening in Kyegegwa and Rwizi Mbarara region”. 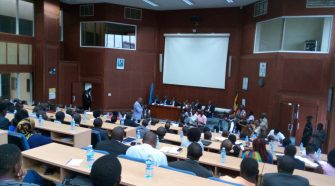 “We Won’t be Intimidated” – Doctors’ Meeting With Govt Hits Snag